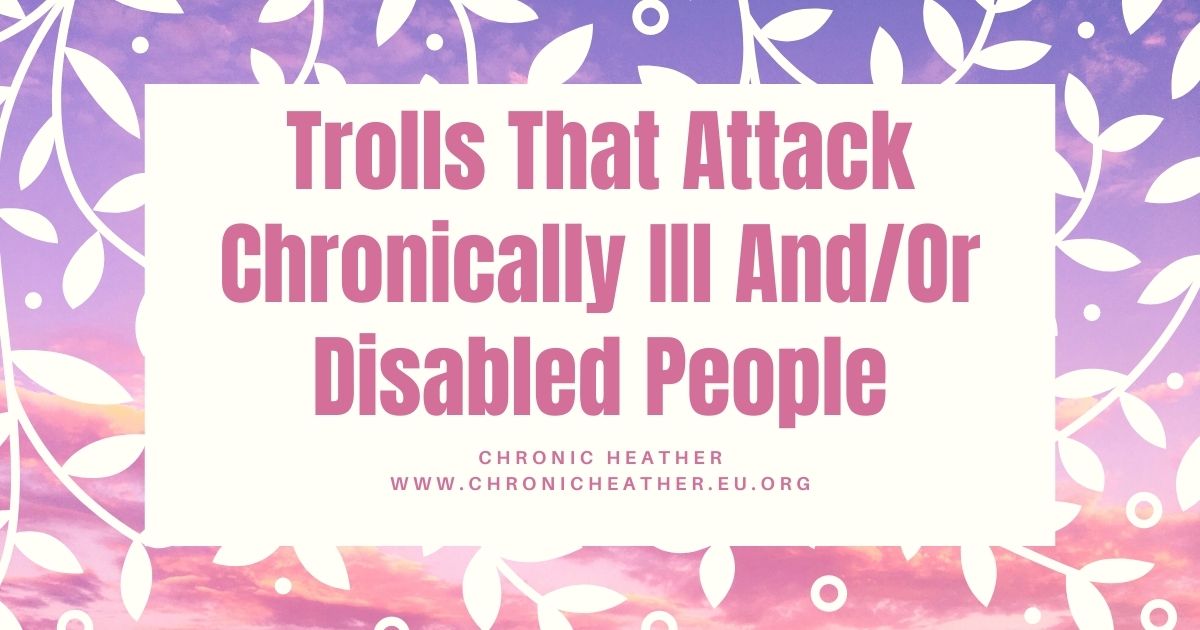 Being chronically ill and disabled and also on social media a lot, I get to be the target of trolls quite often.
Every month I get some hate/abuse/trolling from people that target people who are disabled or chronically ill.

Anyone that knows me, knows I am very strong willed, some anger issues, don’t get upset easily.
I don’t get upset over what trolls say, but it does hurt when it is targeted at you because you’re chronically ill and disabled, plus its angering as they have no right.

The trolls just don’t care what it does to us and how horrible it makes us feel. So many of these people wouldn’t say what they do in person as they don’t have the guts to, they are just ‘keyboard warriors’ and type up their hate/abuse because there are no repercussions for it and because they can’t see you in person.

They are usually fake profiles and 90% of the time they are made purely just to harass me which is horrible. There was one that made 3 accounts day after day to harass me. They all got banned thankfully but they often don’t. Mostly they do not get banned at all. They don’t even get their posts removed!
Twitter do not take harassment seriously at all. Nor do they take hate seriously. I have reported some horrible things and they don’t do a thing.
They sometimes remove some posts, but not all and then say they didn’t find anything wrong, even though they removed some posts. Makes no sense.

There are the ones that send abuse and hate saying you aren’t disabled/chronically ill even when you are. This really causes distress. Don’t they understand how horrible it is to hear someone saying things like that? We have it bad enough having to prove ourselves to doctors and the government for disability benefits, don’t need strangers who don’t know us sending hate and making us have to prove ourselves all over again even when, in my case, I have been blogging and tweeting for over 3 years about my chronic illnesses and disability. Literally years of “proof” but they don’t read that, they just see someone and attack. They don’t care who or if it hurts.

These horrible people that come out of blue to send you hate for no reason… why do they do it?

I often get them when I reply to a post saying I can’t work or have no money. They see that as a sign to attack the person and they list ways they tell me I can work even though they haven’t seen a single thing about me other than my reply. They have no idea what I can or can’t do.
Then I reply to them as I feel I have to as it hurts so I have to correct them.
I say I can’t work due to my extreme chronic illnesses, being disabled and housebound.
Then they reply with how I can still do the things they listed even though I can’t.
I can’t do a thing! Getting out of bed it hard enough! Standing up is hard enough! Moving an inch is so hard!
These horrible trolls have no idea how much pain, fatigue and suffering I deal with every second of every day.
I wish I didn’t have to live in poverty but I can’t work!
I try streaming as I mention a few times but that doesn’t bring in anything even though I tried so hard and it was extremely painful, tiring and leaves me close to passing out at the end of it, to the point I have to rush to bed and stay there for up to 3 days from 1 3 hour stream.
My health is horrific and trolls don’t even care if you tell them, they just continue to give you hate.

I have to spend time typing up replies as I feel I have to defend myself against these awful people, but typing really hurts!! I type blog posts over a period of time as it just hurts to sit and type, I even have a FAQ so I don’t have to type up the same answers over and over as it hurts too much, so replying to these awful people literally causes pain both physically and mentally.

I always report these nasty people to Twitter/Facebook etc and you should too! If you ever see any kind of hate or harassment, please report it!! It takes seconds and often they don’t do a thing unless multiple people report them! So please just click report and take those 20 seconds out of your life to help people like myself who get targeted a lot of the time.
On Twitter and Facebook you click the 3 dots at the top right of the post and select report. Please do it whenever you see these posts.

I am housebound and I just see the same 4 walls every single day. I have a really low mood as it is and having to deal with trolls or hate on top of that isn’t nice.

It’s a shame that we live in a time where people can just send hate online and most sites don’t take any action on it.

I wish that Twitter and Facebook did anything about these issues. You report them but you sometimes instantly get a reply saying they didn’t find anything wrong meaning they haven’t even looked…
Twitter is the worst of the two for not taking action on hateful trolls.
One thing I found, is if you report, then report more or reply to the email about the report saying that there is hate and they need to look again, sometimes they remove it and ban them the second time, so do report people! Multiple times if needed as it only takes 20 seconds max to report someone.

If you get messages or just see posts from people like this, please do report them. Don’t just leave it, do report them as they might have done this to many others so your report might get them banned!

To the trolls:
Why do you say these horrible things to chronically ill or disabled people? Does it make you feel good?
You make us feel horrible! Absolutely horrible. It is upsetting and angering after a few years of it! You have no idea what our life is like or anything, and you have no right to make horrible comments or assumption that aren’t even right! Do some research before typing, or even better just don’t type to us at all!
Bad enough that a lot of us have depression when housebound and disabled as we see nothing but 4 walls every day. You have no idea how much we fight to get diagnosis, fight to get benefits, fight to get money to live off, fight to get medication to help. You have no idea what it is like and how much some of us struggle with health and money.
I hope you don’t become chronically ill or disabled which you could as people do every day, and if you did, I would love to see how you deal with it! I would also love to see how you would deal with the possible ableist trolls like yourself that come along to give hate every few days.
I would love to see how you would cope like I live. Living on on £300 a month, unable to work, unable to do anything that could earn you money as I can’t do much. Stuck in bed and a chair every single day with no money and in extreme pain and fatigue. I would love to see how you would cope with that plus the abuse on top.
Stop trolling chronically ill and disabled people! It is so much more hurtful that you know!
You don’t know a thing about us, so stop with the hate!