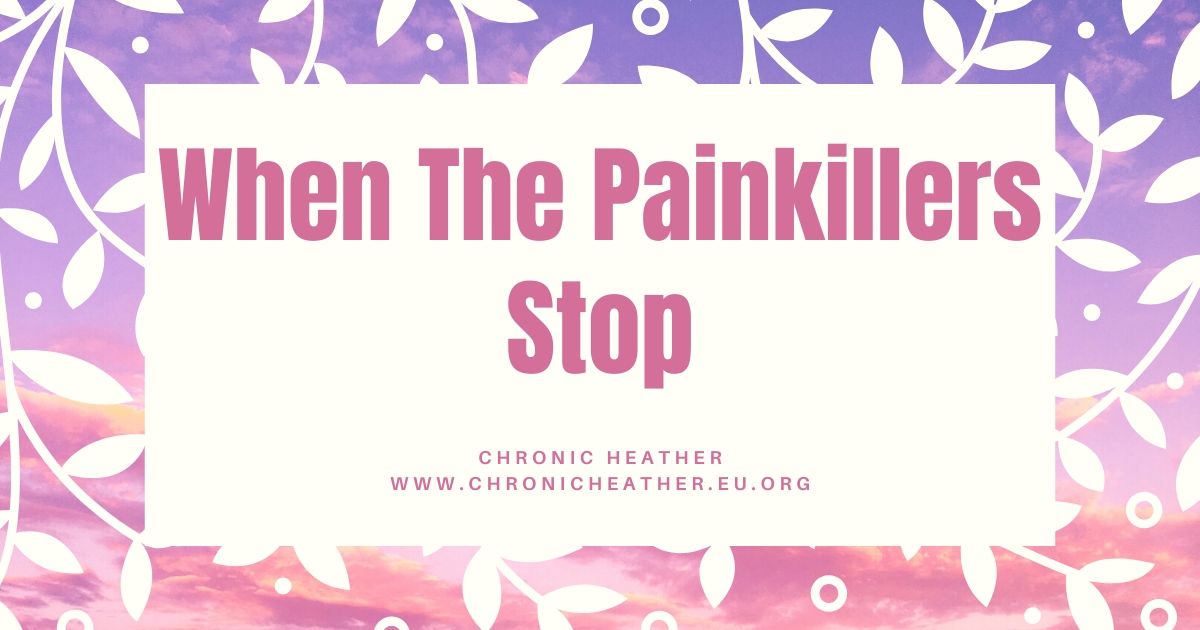 I worry often about what will happen when I am no longer able to get the Matrifen or an equivalent.
Matrifen is the only thing that touched the pain that I can get on prescription. I get chills and sweats on the night before I change my patch which is awful but that is because it is a patch and my body absorbs it all before the end of the patch. If it was a tablet I would be fine.
Cannabis works better for me but you cannot get it on the NHS for chronic pain, only if you have a lot of money to get it on a private prescription.
I dread that one day I will be left with nothing and left to suffer from the horrific pain I had before and unmedicated.

My GP won’t take me off yet but as per a previous blog post, one doctor did want to and with the NHS guidelines for opiates for chronic pain, the simple fact is one of two things will happen at some point in the near future.

This worries me a lot that I will end up with no painkillers and won’t be able to get the only thing that works well for me with zero side effects which is cannabis. It is even more effective than my Matrifen, plus I wouldn’t have to take pills to counter the side effects which I do with the Matrifen.

My doctor once said something to the effect of “there is nothing else but the Matrifen” even though I know there are people on a variety of other opiates and have been for decades with no issues. I had tried pretty much all non-opiates before the patches with not even a slight pain reduction, just side effects.
The other doctor that wanted me off them, would have me on nothing at all, left to suffer rather than being on an opiate which is ridiculous but unfortunately true.

Cannabis is not available for chronic pain on the NHS as they make lies such as “no evidence it is effective” and state it is “too expensive”, yet I visit the doctor every single month and take medication to counter the side effects so it wouldn’t be that expensive.
You would think that if they really cared for patients you would be able to get what works best for you, but unfortunately, it doesn’t work that way.
Ironically you can get it on prescription privately but that costs a lot of money! That shows how unfair it is.

That day will come whether it be sooner or later but it will happen and basically, the NHS will be committing me to a lifetime of the most severe pain ever that is completely unbearable, and honestly, I would quite simple rather be dead than suffer that again.
It was the worst time of my life. I have lots of pain still but nothing remotely like it was!