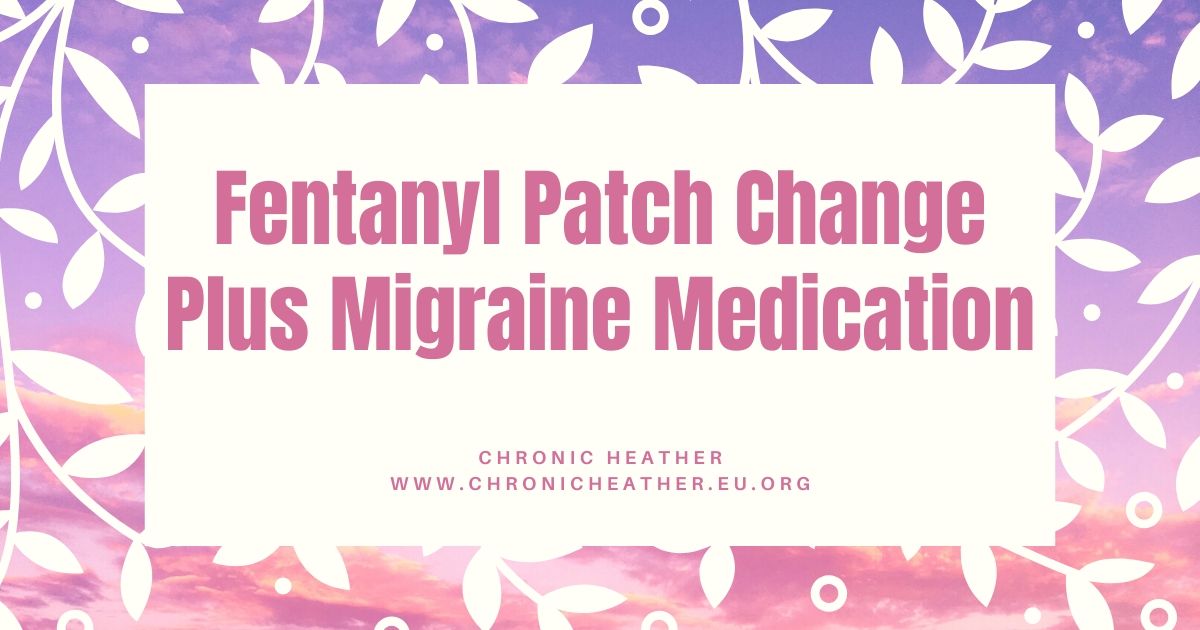 Going back to changing my Fentanyl patch every 48 hours.
I was still getting withdrawal between patches at 60 hours, not anywhere near as bad as at 72 hours but still was there.
I tried 48 hour intervals last year and had some issues. I am trying 48 hours yet again due to the fact that firstly, the patches run out about 52 hours and take numerous hours to kick in after changing patches so I am left a long time with withdrawal.
Secondly I do not get that drunk feeling after changing a patch anymore (which at 48 hours became a constant drunk feeling), so I am hoping that as I don’t get that this time seeing as I don’t have it now. We will have to see.
I know some brands are better than others and some people, change between brands and the withdrawal goes away. Here at my doctors, as they are NHS and on a budget (different doctors have different budgets also), they won’t let you have anything but the cheapest brand no matter what!
The only other real issue I had was feeling hot at 48 hours last time which I am really hoping I don’t get as it wasn’t nice feeling really hot all the time.

I have a feeling that 48 hour intervals will work at some point, whether that be this time or another point later on when the withdrawals are even worse but I don’t want to get to that point.

With the COVID pandemic, I don’t want to have to go onto something else that will be another opioid meaning I most likely will have lots of issues but getting a doctor appointment is impossible now, as they can’t book you in easily nor book you in advance meaning it’s horrific for us with chronic illnesses where I live.
I had spoken to my doctor the other day for my monthly appointment and he said he can’t book me in for my monthly telephone appointment next month due to the pandemic. Not sure why as it wouldn’t affect anyone else plus I have to have the appointment every month, so I don’t see why they couldn’t do it. Instead I have to try to call when I am near out of medications(!), to get my telephone appointment.
Scary as it takes 3 days to get my medications delivered so if I have to call to try to speak to him and don’t get in for days I could be almost out.
Seems like it is a bad time to have a chronic illness where you have to speak to the doctor monthly!

I also got some Sumatriptan to try for my monthly migraines I get pretty much every month that last 5-7 days with nausea, vomiting and debilitating pain. I had asked him for something before but he dismissed me and said there was nothing he could give!
This time I said specifically that I knew there was medications I could take to stop them getting worse rather than a painkiller. He then said yes.
It seems my doctor will be more likely to give me a medication if I know what it is in advance, which I often do as I have researched all my conditions in great detail as well as all medications available, but I don’t always bring up specific medications as I don’t want to sound like I am trying to be a know-it-all.
I know Sumatriptan isn’t great with Fentanyl or Clonidine as it can interact with them both but I guess I wouldn’t be using it too often so must be fine.

Fingers crossed for me that the patch change works with no side effects like last time!