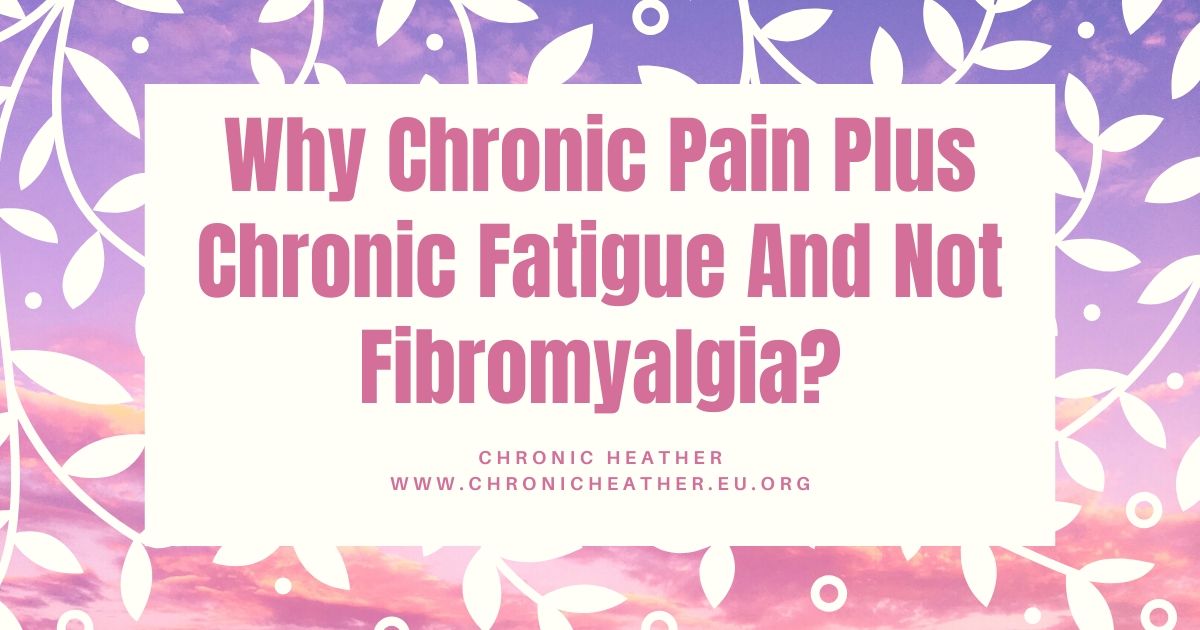 I initially wondered why I wasn’t diagnosed with Fibromyalgia seeing as I have chronic pain plus chronic fatigue, but there are some differences as to why it isn’t Fibromyalgia.

I have suffered from severe pain for decades and only got a diagnosis in the last few years which was diagnosed as just “chronic pain” as they couldn’t find a cause (although they never did many tests even in the many decades I have had it).
I have also had severe chronic fatigue since I was a kid which has gotten much worse over the last 20 years to the point that it is very severe. This started long before the chronic pain.

The main difference that it is chronic pain plus chronic fatigue and not Fibromyalgia is that I don’t have good days, I have just bad and worse days.
With Fibromyalgia you have good days, even if they aren’t often. I have severe pain and severe fatigue (from the CFS) all the time no matter what and there has never been a single good day.
I also don’t seem to have any tender pressure points which are found in Fibromyalgia.
My pain is also apparently much more severe than in Fibromyalgia as I can barely walk more than 60 feet or stand more than 2 or 3 mins without unbearable pain to the point I can’t go on and will suffer for weeks just for moving a short distance.

Fibromyalgia often responds to treatments for the nerves, anti-seizure medication and anti-depressants, whereas with my chronic pain they don’t do even a slight thing to help and only opioids did a thing to help my pain.
People with Fibromyalgia often get results with pregabalin, gabapentin, duloxetine and things like that. Not everyone of course, but most patients get results with some of these and similar medications.
For chronic pain these often don’t do a thing and actual painkillers are needed to help.

I am disabled as I can barely move at all and walking or standing is incredibly difficult for me so I cannot stand long or walk far. I have a walking stick and a rollator and still struggle to move.
Before I got my painkillers, I would just lay in bed crying all day and night as it was the worst, most severe pain I have ever felt and it wouldn’t go away. It became unbearable. I went as long as I could without pain medication but I had to get something to help as my life was non-existent and too unbearable.
I tried pretty much everything available before finding Fentanyl for the pain as nothing else did a thing (other than cannabis which works amazing but the NHS won’t prescribe it for pain).
The Fentanyl helps a bit and has been the only thing to even do a thing for the pain, but there are a lot of risks using it as it is pretty much legal heroin. I also still cannot stand or walk far, but it takes away some of the pain that made me just lay in bed crying unable to move. I also have morphine for the breakthrough pain on the worse days.

My chronic fatigue is incredibly severe and I have to sleep 10-11 hours a night to be able to get out of bed. I still feel as though I haven’t slept in weeks and feels like I have run a marathon every day even though I may have just woken up. I do sleep but never feel refreshed at all. I feel like I could sleep for weeks on end.
If I move more than usual, then not only do I suffer from chronic pain, but I suffer from chronic fatigue too as it makes me even more drained. The slightest “activity” (even going upstairs more than usual), feels like I have done yet another marathon and am utterly exhausted and hurt so much.
Obviously the opioids make the fatigue a bit worse but the pain was incredible, much too unbearable to suffer with constantly.

My conditions are severe and constant. I do not get any good days with any of them and every day is a struggle.