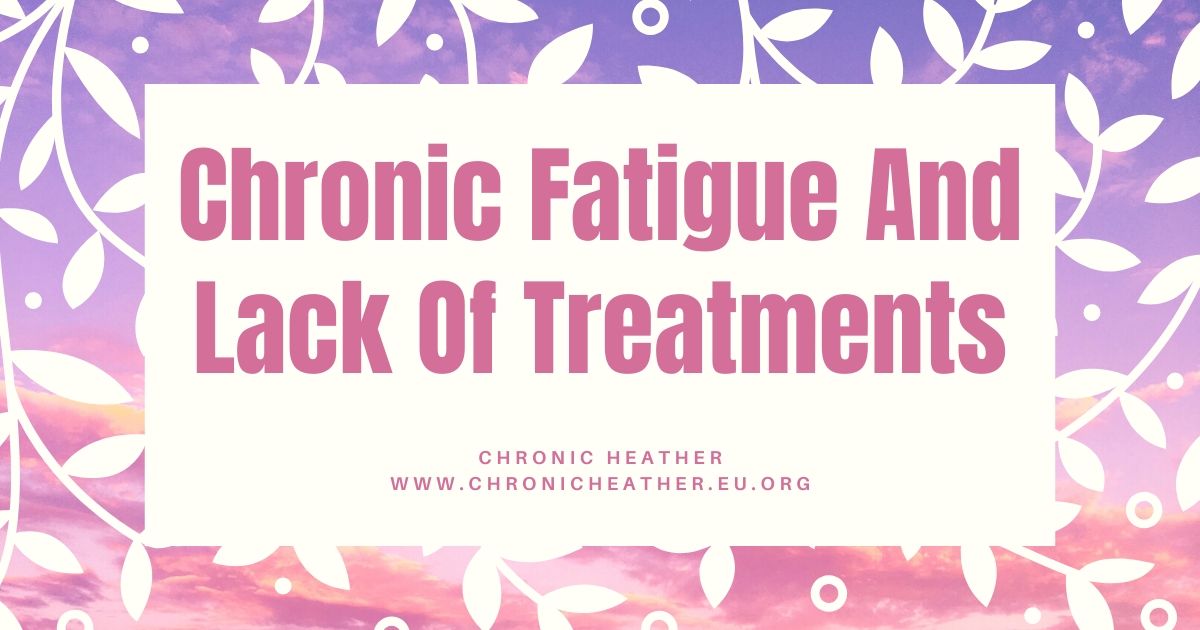 When I spoke to the doctor recently on my 3 weekly review, I also mentioned my chronic fatigue (CFS/ME) again. This is one that even after decades of having this, doctors just brush it off like I am just a bit tired when I am actually unbearably struggling to keep awake and so exhausted all the time I struggle to move.
I had blood tests over the decades, but when they used to come back ok they would say “the tests are fine” and that was the end of the conversation.

After many decades one doctor said it is chronic fatigue (CFS is also known as ME).
The thing is no one ever said anything else. I know myself as I research everything, that there is no cure but no doctor has ever suggested a thing. They just end the conversation.
In the many decades I have had it, other than a couple of blood tests and the words chronic fatigue eventually being said, I have not been referred to anyone or been told to do anything (I know there is no cure for it).

I mentioned it again to my doctor as I really do struggle with it much worse now I am on opioids and he just said “there is graded exercise but that’s about it” and that was the end of the conversation. Graded exercise therapy (GET), is known in most other countries for being bad for CFS! He pretty much just mumbled it and then ended the conversation, no advice, sympathy or anything.
With the Fentanyl as well as my CFS, I can barely keep my eyes open when I am sat at home which is all the time and getting out of bed takes an hour. It was bad without the opioids, but with them, it is so much worse.

The UK spends less than £1 is spent each year per person suffering from ME/CFS on research! It is reported to affect 0.2-0.4% of the population here in the UK so as it is a small percentage they just don’t seem to care.
In a report in 2017 from ME Association, the estimated the cost of ME/CFS to the UK economy is around £3.3 billion per annum. You would think that would make them want to do more research!
It is a condition that no country seems to care about and just dismisses. Some doctors seem to think you are making it up that you are fatigued all the time, others blame depression. We are just not cared about sadly.

Some countries prescribe things for the fatigue such as the USA which often prescribes medication designed for ADHD for fatigue relief or other neurostimulators. The UK prescribes nothing other than things to help you sleep if you have that kind of issue which I don’t.

It is a condition that leaves most of us that suffer from CFS to an extreme, feeling abandoned, unbelieved and uncared about.
I think that people that don’t have it just think we are a bit tired. It is nothing like that! For me, mine is extreme with the CFS and the Fentanyl which leaves me exhausted, fatigued to an extreme that just getting out of a chair and moving a tiny distance leaves me with no energy left for the whole day. Feels like you have run a marathon every day and not slept in forever.

Even without the Fentanyl, I was still horrifically exhausted and tired all the time, I just didn’t need 11 hours sleep every day which I do now and I didn’t feel like I would fall asleep if I close my eyes just after getting up on a morning, but other than that it was pretty much the same.

If only there was more research and more treatments. I am sure there are probably lots of things that probably work off label but as they just don’t do any clinical trials, they won’t know.
NICE (who tell the NHS what they can and cannot prescribe for conditions), have more information on what not to do/give patients than what they offer on how to help them!

Plus they still advocate for the dreadful and potentially dangerous graded exercise therapy (GET). It causes more harm than good and yet the NHS still tells people to do this in 2020! Often patients that used GET ended up worse than when they started and the vast majority ended up worse or no better-using GET.
In the USA most doctors plus the CDC do not recommend GET for CFS. Sadly the Mayo clinic still does for some reason.
Another one that is bad for CFS is CBT. You cannot fix it with CBT and yet the NHS often suggest it.

All this bad information being given to patients, some of it potentially dangerous as it could lead to more harm.
We desperately need clinical trials and more money being spent on research for CFS/ME!

Here are a few links to sites showing that GET and CBT are no good for CFS/ME.
This is just a small few as a quick search on the internet will show you many more from reputable medical sources.