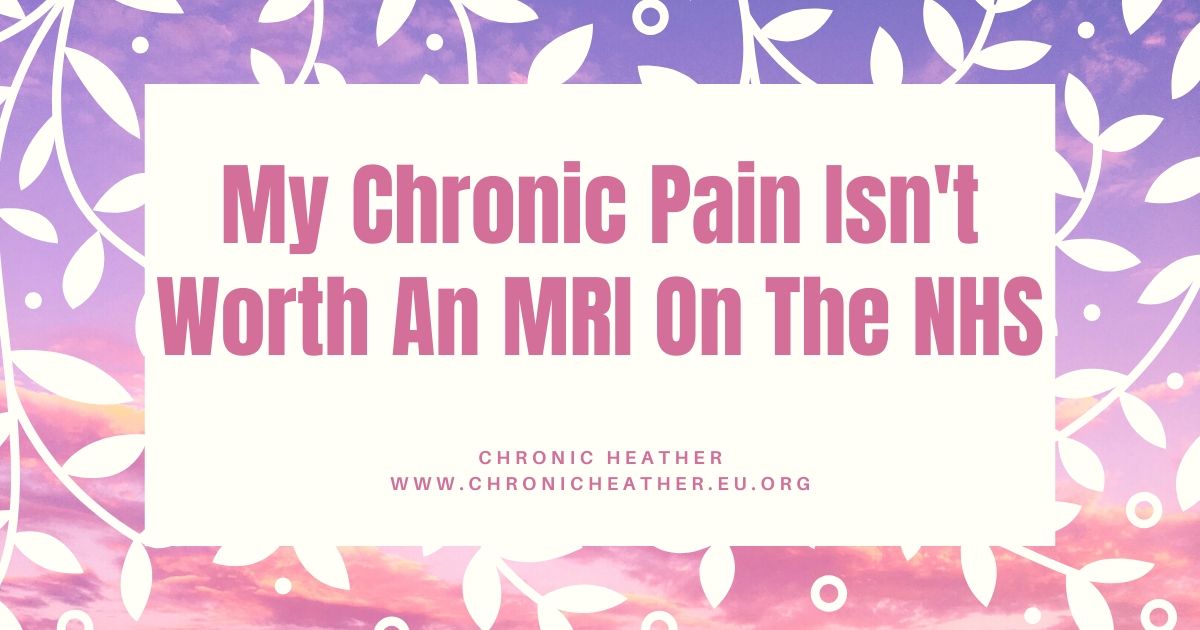 Update about my latest doctors appointment and a telephone call with the physio he referred me to in the hopes of getting an MRI.
Firstly a background on the only MRI I have ever had which was a lumbar and sacral (lowest part of the spine that goes into the tailbone) 6 years ago.

I had a different back issue 6 years ago which was I couldn’t get out of bed as I was so stiff I could barely move and the pain was unbearable. Once I got up, the pain would dissipate to its regular pain level.
I was sent to a rheumatologist and got a lumbar and sacral MRI scan for this issue, which was before my chronic pain became so bad I housebound and disabled because of it.

In the MRI it showed slight issues including these few including what they mean for easy reading:

I never once got a full back MRI even though I have severe chronic pain that made me bed-bound before the Fentanyl. I have seen many doctors, physios and pain clinics, and not one referred me for one, even though this old MRI showed some early issues back then. My pain got worse and worse over time and physio exercises didn’t help and it still got worse to the point it is at now which is unbearable, horrific chronic pain.
I thought I would ask my doctor for one again at my 3 weekly regular appointment.

I spoke to my doctor for my 3 weekly appointment yesterday.
With the pandemic, you can’t make an appointment for a specific time in advance anymore, you just get a day he will call. Well, he always calls me first thing around 8am when I am still sleeping due to my chronic fatigue. I am unable to function at this time which I had told him many times before but he laughs it off as though my severe fatigue is a joke. I can’t get up before 10.30am at the very earliest.
I have to write down what I am going to say and even then it is hard to get words out when your brain isn’t functioning for at least a few more hours.

I had been getting more pain in my shoulders and buttocks over the last few months, and in the last few weeks much more stiffness in my arms to the point I struggle to move them. The buttock pain is severe and runs down my leg now.
He didn’t give much help as usual so I asked for another MRI, which I was going to ask for anyway as I haven’t ever had a full back MRI!

When I asked if I should have an MRI, the GP said he would get a FPC (First Point Contact) physio to call me tomorrow to see if I need a scan. He can refer himself so I assume this was a way to fob me off to yet another physio (seen and spoken to probably 10 different ones over the years).
I have never had a full back MRI so surely I should, plus the MRI I had 6 years ago was just lumbar and lower region only which already showed slight issues back then before the pain became unbearable like now.

At the end of the call, as usual, he asked me which of my medications I need. I said just the Fentanyl patches and can you re-authorise my Dalacin T as it needed approval again.
He did that but totally missed the Fentanyl prescription which if I hadn’t of checked online (which I do every time as I have had this before), I wouldn’t have gotten my painkillers and I would have run out whilst waiting for them to be delivered!
He sadly often does this and in the past has made mistakes with dosages. I now always log on and check what he wrote and what he prescribed as the mistakes are frequent.

He wrote this time that I hadn’t told him about the pain increase in my shoulder prior, which why would I? I have chronic pain, the pain varies day to day and week to week!
I can’t tell him every time the pain is a little worse here and there as I have told him before over the years how I often have really bad days, which is why I have the Morphine for breakthrough! The stiffness had gotten worse since I last spoke to him or I would have mentioned that before.

Today the physio called and said “so I hear your shoulders have been getting worse” I explained I had been getting more stiffness and I couldn’t even lift my arm up high as it was too stiff and painful to move. Some days are worse than others. I said I wanted a full MRI as I have never had one and when I had my last one it was just a lumbar one 6 years ago for a completely different issue that showed early signs then, and it was before I got the severe chronic pain.
“I don’t why I was asked to call you as there isn’t much I can do and I couldn’t even refer you for one if I wanted to.”

“You saw rheumatology” I interrupted and said yes 6 years ago for the completely different issue before I had the all over severe chronic pain.”
“You want a full MRI then,” I said yes. “You would have to see a spinal MSK to do that but they aren’t doing them right now”, which of course I knew and I said I didn’t expect anything during the pandemic.

“Not sure if that would even be worthwhile as you once saw xxx who did nerve tests” I said I never had any tests. “Reflex tests,” he said. So he means the ones where they bang our knee and it moves.
“As that was fine that will be why you didn’t need an MRI. An MRI wouldn’t make much of a difference in how you are treated either.” I said but there could be something wrong as there were early signs 6 years ago on the lumbar MRI alone, and I would like to know either way.
He said, “there isn’t much of a budget in this area for unnecessary MRI’s”.

My health isn’t worth it basically! And because my knee and elbow moved when it was tapped, I don’t get a full MRI even though this was just prior to me being bed-bound with even more severe pain. How does that make sense?

“You are on lots of pain medication too,” I said that yes as before the painkillers I was bed-bound and screaming in pain. “There is lots of evidence they don’t work” to which I got angry but of course didn’t show it and told him how well they do work and quoted how many millions of us are in unbearably pain without and told him again how I was bed-bound screaming in pain before them, to which he stopped talking about it.

What the heck? so basically because my knee moved when it was hit and whatever else they did then, I don’t get a full MRI even though this was just prior to me being bed-bound with even more severe pain. How does that make sense?
And again a physio commenting on opioids because of NICE saying they don’t work which they do for MILLIONS of chronic pain patients. This is rubbish which started in the USA and spread over here leaving millions of people suffering in severe pain all over the world. Check out opioid hysteria.

He then pretty much ended the call as he knew that it was pointless saying “You have your pain patches and your exercises anyway don’t you”. I said I have my painkillers yes, but as for exercises, I can barely move anymore as the pain is horrific. He is another that assumes exercise are a cure-all for all forms of pain which they aren’t.
He noted down that I wanted one but that isn’t much use is it.

So the whole call was pointless. He didn’t give any advice on the stiffness in my shoulder, said that I don’t need an MRI as there is no point as my reflexes years ago were ok. He more seemed to think that as I had seen so many people over the years that they must have done tests, but all anyone did was talk about how pain works and what exercises I can do. That is literally it!

I fail to understand how when I have had a lumbar MRI 6 years ago that showed early but minor issues at the time before the pain got unbearable and because some reflexes a few years ago were ok, means that I should not have a full MRI now! I don’t understand.
I can’t walk far now, nor stand long and am bed-bound without the Fentanyl and with it am still housebound. The amount of tests I have had is none at all. Only thing anyone ever did was a couple of reflex tests such as tapping your knee and elbow.

He (and honestly everyone I have met in the NHS) basically think that if something isn’t curable that it doesn’t matter if you have tests as there is nothing they can do anyway. It is all a money issue. As I have a chronic condition I don’t deserve the MRI as it’s not curable. He even told me they don’t have the money for “unnecessary MRI’s” (his words) in this area, so that is exactly what it is; my health isn’t worth it.

Searching on the internet it seems from NHS documents that they rarely do MRI’s due to cost even though it often turns out they have missed numerous conditions (often fatal ones) because of this ruling.

They waste the money on sending me to people that can’t do anything but chat to you such as the pain clinic I had that wasn’t a pain clinic really where the guy told me to push myself to severe pain as that would raise my threshold of pain. That is not true and horrific to tell patients, but that is what they are spending money on. An MRI would tell if there is anything wrong, which most likely there is now. The stiffness could be spondylotic or arthritic as per the previous lumbar only region MRI, well before I got to the pain level I am at now. A full-body MRI could show for definite what is causing it for a diagnosis which they don’t care about.

1 doctor and 1 physio and neither of them even commented on my stiffness even though that is how the physio started the conversation. No full MRI for someone with debilitating chronic pain. 2 pointless conversations.