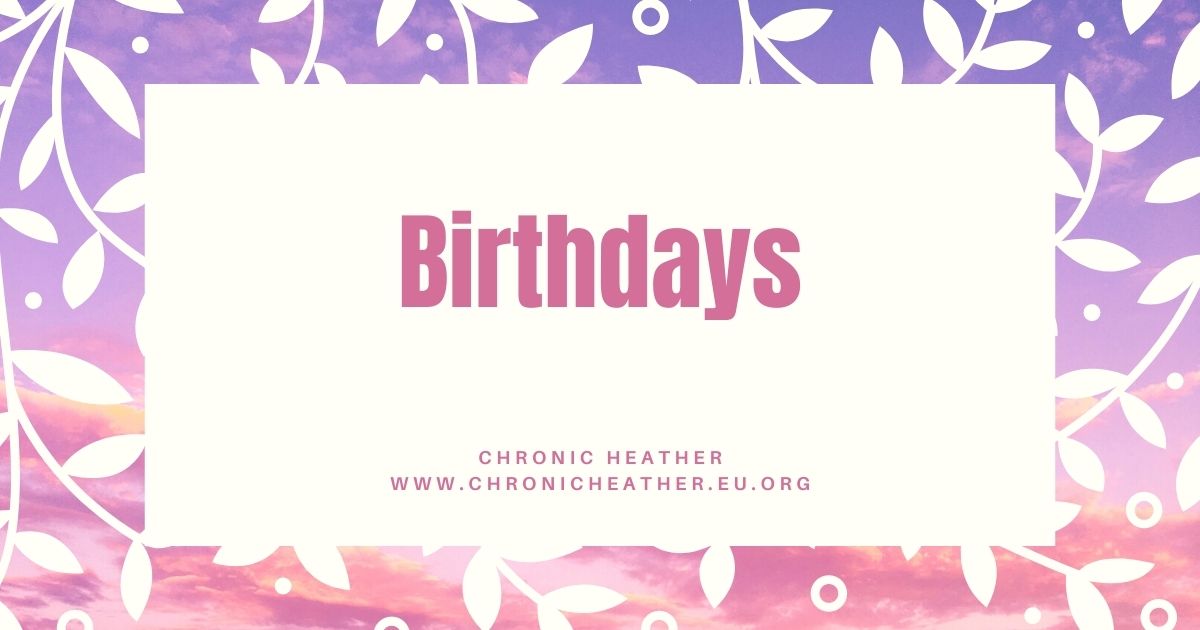 When you are severely chronically ill, celebrating birthdays is often a low priority. As my birthday rapidly approaches which is a big one this year, I feel like I did at 18 although my body feels 100.

I can barely move and am exhausted beyond belief all the time due to my chronic illnesses, plus I have no money so I couldn’t go out if I wanted to, not that I have anywhere to go, nor have no friends locally and most of the other friends stopped being a friend a long time ago when I was getting more chronically ill and in return, more reclusive.

I have never been one to celebrate birthdays or even Christmas since being a kid as I have had to look after myself from being 15, so I didn’t celebrate them nor remember ever doing anything or receiving anything for a birthday since due to lack of relatives.

This might sound selfish but I’m an honest person; there is so much stuff I would have loved over the years and would love for my birthday or Christmas. Most of it is health-related and a couple of entertainment items, simply because I can’t afford any of it due to living off £300 a month. The list is huge and grows over the years, but I don’t have any relatives or friends so I never get anything and haven’t since I was a young kid.
I don’t expect anything as I have had to look after myself alone since 15, but I can’t lie and say it wouldn’t have been nice to have gotten some of the things I have wanted or needed over the years.
At Christmas too, you see pics of people with their relatives celebrating and opening presents every year for decades, and I sit watching movies doing nothing lol.

Many people seem more obsessed with age than how old you feel.
“How old are you?”, “Oh you’re getting old”, “You don’t look that old” etc. My mind feels the same as it did when I was 18. My body due to the chronic illness makes my body feel 100 but I still feel the same as I did at 18.
Age is just a number. I have felt that way since being quite young. I don’t understand why people ask or care how old you are so I stopped telling people how old I was after about 20 as it simply doesn’t matter.
I have to admit that this birthday as it is a big one, makes me feel much older but that is simply because of how others seem to think of it.
If you hear people when they tell people they are hitting 30, 40, 50 etc, people react with the statements above. “Oh, you don’t look that old” being the most common reply which instantly makes you feel old even when you aren’t!
This is why I stopped telling people how old I am a long time ago.