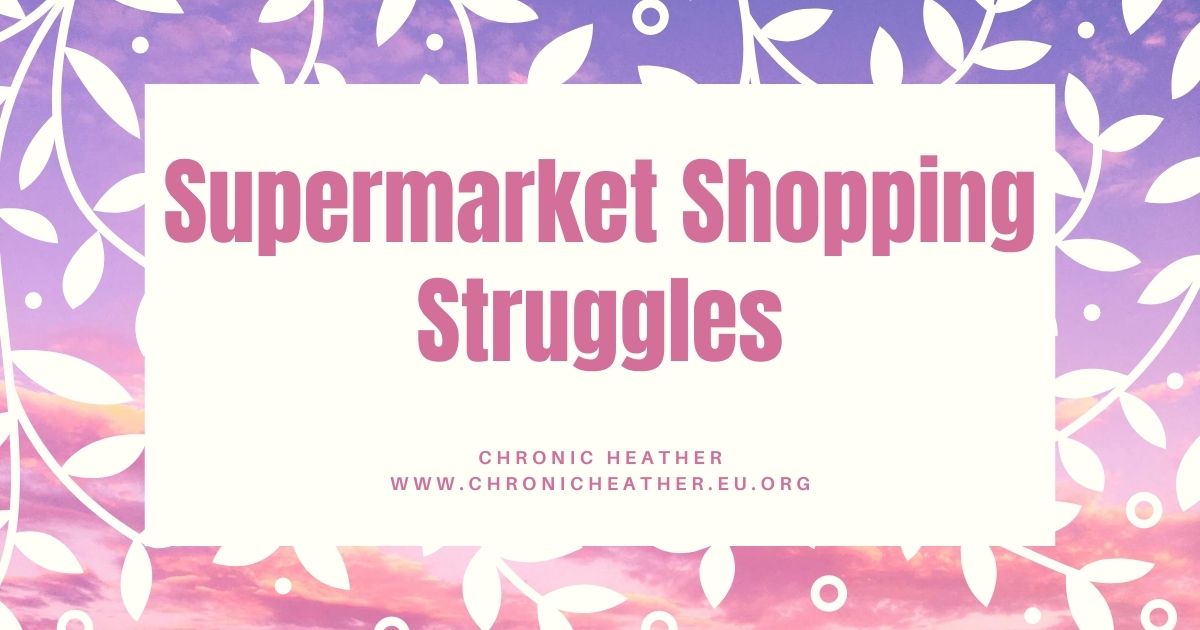 Being chronically ill and disabled, plus unable to afford a car on the pennies a day I live on, I have to rely on deliveries as I can’t go out.
I used to get food from a cheap supermarket by getting someone else to get me it, but since the pandemic, I have to get food delivered.

You don’t get bags due to government rules now unless you pay except during the pandemic when everything was supposed to be in bags. Some supermarkets won’t let you have them at all, other will for a charge.
Mine wasn’t letting you choose them but said all orders during the pandemic would be in bags. They weren’t. I wrote in I was disabled and needed bags as customer service told me. They never came in bags.

The delivery drivers from the supermarkets arrive with crates that they dump on the floor and expect you to unpack. I physically can’t unpack these at all. I can’t even bend to the ground.

I was told by the supermarket that all deliveries during the COVID pandemic were supposed to be in bags yet every month they would arrive without bags.
I keep being told from the supermarket lies such as “they don’t have stock of bags”, even though it has bean many months and the drivers even tell me they don’t pack in bags no matter what or who it is for.
The only time I got bags was when the supermarket customer service called the store. This only happened once as I got to speak to a person who understood and tried to help rather than the rude ones that couldn’t care less. No bags on all but 1 order, and that was purely because the staff member called the store to make sure. So there are bags, you just won’t use them for me.

Luckily I had someone to unpack most of the last deliveries due to them working from home all but one of the times. They have back pain issues too and had to cause themselves severe pain unpacking which lasted days all because the driver wouldn’t and I couldn’t and it was unpack or it goes back!

I had to contact customer services every month and have for many months now as I never get bags even though I was told to write it in comments as I am disabled and need the help.
They still come without bags.

Now my supermarket is letting people pay for bags at 40p. This to many of you is nothing. To me this is a lot of money and over half a days living for me as I live on under 70p a day, usually about 60p.
I get £300 a month and that is it so I don’t have the money, plus I shouldn’t have to pay as the equality act states: “The Act makes it clear that a person who is under a duty to make adjustments is not entitled to pass the cost of compliance to the disabled person”.
They should provide and cover the costs themselves.

We could pass the bags back the next time we get food delivered if needed but no they won’t do that. They won’t cover the cost of 40p bags for disabled people because they blame the governments rules on bags, even though the equality act states they should cover costs to make reasonable adjustments.

Most if not all supermarkets are the same too. They don’t help at all no matter what the equality act says or to try to help. Won’t pay the pennies cost of bags to help someone who can’t unpack crates. They won’t make those adjustments needed and expect you to magically do things you physically can’t.

So I have a choice of pay which I can’t afford to do on the little I spend on food, or don’t pay and have to unpack which I can’t do, or hope you get a driver that will unpack into bags which 99% won’t and if they do, you suffer in pain waiting at the door while they do it.

This is how little companies care for disabled people like me. They couldn’t care less.

What are you supposed to do when a crate of groceries arrives and gets dumped on the floor and they say they won’t help? They won’t bring them in, they won’t put them in your bags unless you are lucky and get someone nice which in 99% of times hasn’t been my experience.
Welcome to my world.