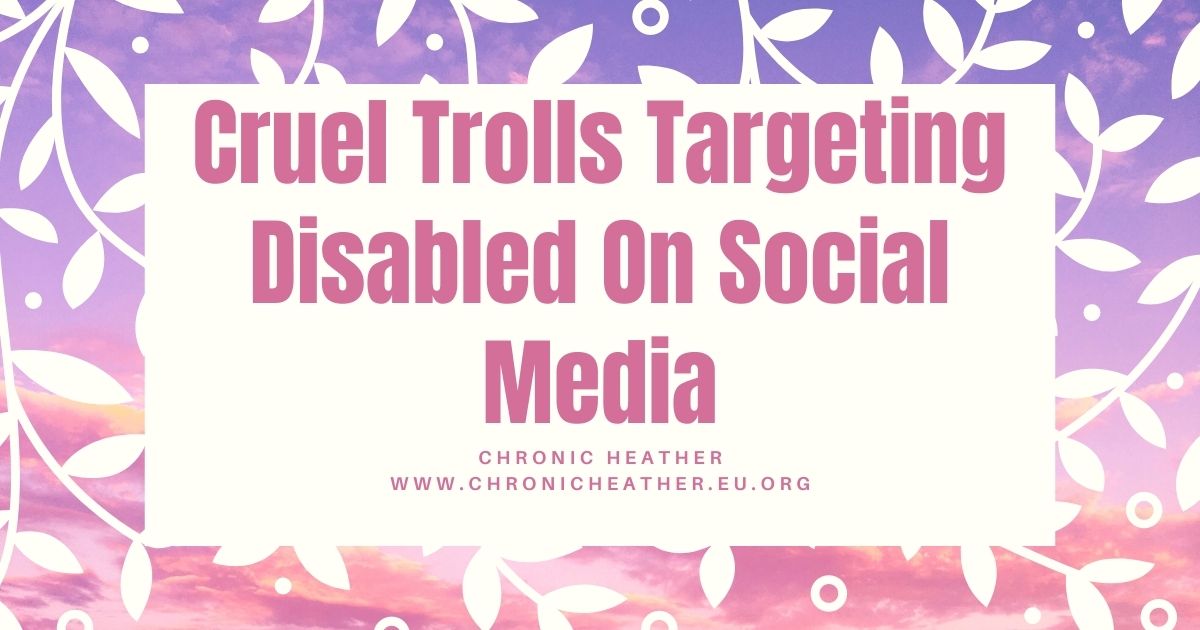 Many have had to deal with this, but now I have too. Cruel trolls that target disabled people to harass them with lies.
The one that targeted me made two brand new fake accounts on Twitter just to harass me. No other posts. They obviously read one thread with their main account but don’t use that account to harass me. I know as they referenced it at one point.

It started the other week with someone making their first new account to target which got restricted so they made an account again this week to troll me which also got restricted because all they did was harass me. They have not been banned nor removed the troll posts.

I know that there are many trolls like this on social media but Twitter and Facebook should do something about it! They should ban the people and the IP. Making multiple fake accounts just to harass someone is meant to be against their rules but they haven’t done a thing about it!
They have been restricted but not banned so they just make more accounts to carry on!
Twitter should take action but they don’t!
They troll even revealed in tweets they were the original troll so they said visibly that they have two fake accounts just to troll me and Twitter didn’t do a thing!
This kind of harassment has a massive effect on your mental health and I already have a depressed mood all the time so this affected me massively.

They targeted me without even bothering to read my about me page which would have answered their questions and probably prevented the abuse, nor my tweets or blog and instead pretty much was saying I can’t be disabled or struggling which is utter rubbish! I am completely honest and upfront about everything in my life which is why I blog about my health and tweet about it too! I am 100% transparent and honest.
My about me and my tweets say the same thing all over and I say the same to anyone that asks. I can’t afford anything living in poverty and I struggle everyday with health and financially on £300 a month, with 55p-65p a day for food and have to buy my own prescriptions as I don’t get them free.

I struggle every second of every day.
I am on the strongest painkillers available plus numerous other medications which I even list on my about me page as I am so transparent about everything!
I didn’t go through DECADES of chronic pain, chronic fatigue, migraines, sciatica, hidradenitis suppurativa etc just for fun! I can barely move!!!

I have proof I am disabled and of my finances but I shouldn’t have to even need “proof”. My word should be enough on the internet and on a blog to which I voluntarily have! I don’t blog about my struggles for years for fun. I am posting my experiences and my struggles to raise awareness. I am very open and share a lot of details on my blog and they don’t even bother to look at any of it before turning to trolling.

I thought trolls at least did research but this one was so lazy it read NOTHING at all and just makes numerous fake accounts just to troll me with things I have already answered on my site and on tweets.
It is not only is incredibly hurtful but is deeply upsetting!
It is bad enough you fight for a diagnosis and then you get trolls who haven’t even had the courtesy to read your site or tweets which would have answered any questions they had instead they just went to make fake accounts to harass me.

In their second account, obviously in a way to try to stop getting that account restricted they even had the audacity to say “I am not trying to be mean or a troll”!! How dare they even say that! You are being horrible and causing a lot of damage to my mood due to your rubbish that you could have had answered by just reading my blog! Or just my about me page!
You ARE a troll as you are making fake accounts just to send me harassment with lies and rubbish you could have just had answered by simply reading instead of making accounts just troll me.

My depressed mood got a million times worse just reading their hate. I am much worse now purely because of them.

If they had even bothered to read my site, blog, about me, tweets, they most likely wouldn’t have done this as I speak about it all there in black and white!
Instead they instantly turn to hate, hiding under a fake name on a fake account as they don’t have the decency to use their real account.

Social media companies need to take more action. I thought that they were trying to do more nowadays but clearly not!

I know of many people who have had the same kind of thing from other trolls and it is very upsetting.
I don’t know why they do it but it hurts.

To the troll: Please read my about me to start with and my site and educate yourself and stop with this trolling. It affects my mental health quite significantly. You are a troll and you are harassing me with fake accounts. You are a horrible person to do this to someone.
Reading probably just my about me, would have simply answered all the rubbish you said.
I am chronically ill and disabled with numerous chronic illnesses all listed on my “about me” page as well as a list of medication I take.