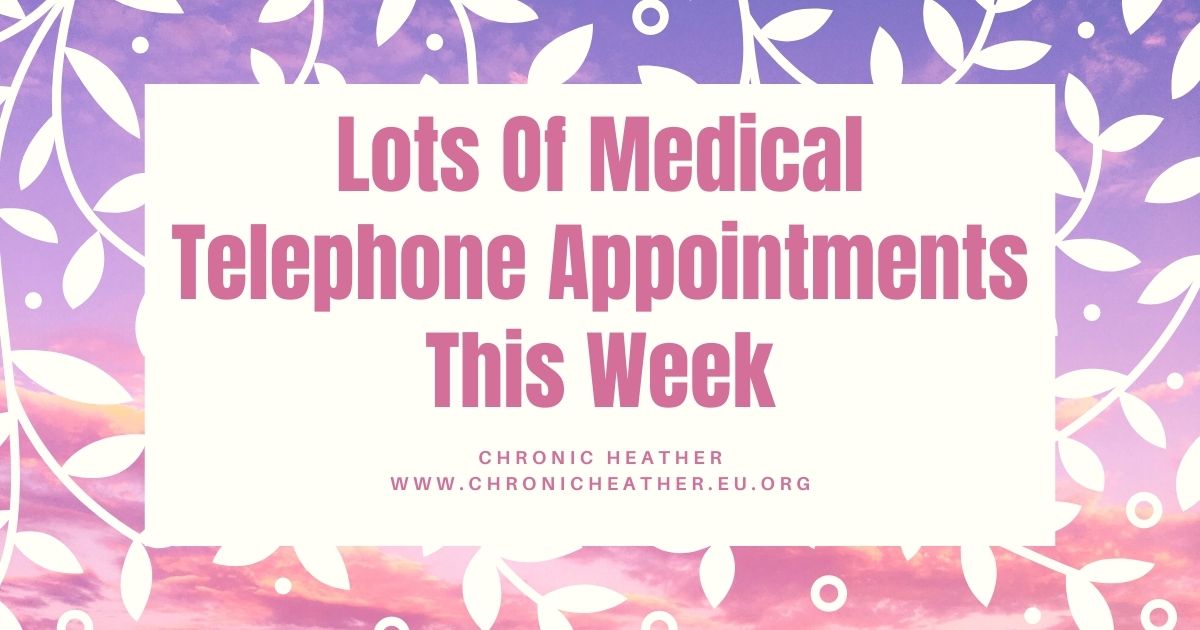 First a few updates on things.

My sciatica type pain has got worse. The amitriptyline that was for the sciatica and migraines seems to have stopped working. More migraines and worst sciatica pain yet. If it is sciatica that is. Still not sure it is sciatica but who knows as no one does tests or checks. I don’t have shooting pain but it does go down my leg in more of a numbness type feeling.

The chronic pain is a bit worse on my very low back near to buttocks but this could be due to the buttock pain, and on my shoulders. The fentanyl still reduces it from when I was bedbound with pain so bad I wanted to die though so it’s still working as much as it can. I really need a painkiller like cannabis so much as it does help. Even if just for the breakthough pain instead of the morphine which doesn’t do much at all.

My knees got worse, to add to the clicking that I have had years was pain bending then and getting up ad they swelled up! I used voltarol gel and the swelling and pain went down but they aren’t anything like what they were. They are weaker, stiffer now and hurt more often.

Have three telephone appointments this week!

One is the rheumatologist again as some things got worse plus I forgot to mention some important things last time and can’t wait until July to see him. He did say I could go back earlier if things got worse or changed.
Last time I saw him he did nothing but check my skin for red marks for the possible sclerosis even though I have 4 positive autoimmune blood tests and severe health issues yet he didn’t do anything else! Well other than make inappropriate comments about my legs being nice…
I said it could be so many different things and he just said yes it could be but didn’t try to find out what!
Really bad appointment so hoping with the info he might do more but unlikely with an NHS doctor for a chronic illness.
Why can’t they try to find out what it is. My pain got rapidly worse at the time my perforated septum came in 2017. Perforated septum are usually caused by autoimmune conditions. They never tested for them! I had to fight for years until I got the tests last year in 2020 which came back with 4 positive for different things.
Surely they should try to find out what it could be by doing other blood tests and scans? That is the only way to find out!

Second appointment is with orthopaedics because I was supposed to get an orthopaedic appointment 4 weeks from September 2020 for a referral back in July 2020. It never happened. I chased it many times and they did nothing. This time he is calling me back, but he (not a doctor) was rude on the phone last time and even laughed at one point.
I was trying to get an MRI and he said he is someone who can ok it, but I probably wouldn’t get it but he would have to see me. He even said I probably won’t get one…
Been trying for many years to get an MRI but the doctors are too cheap sadly. Postcode lottery is how it works. They just look at the one from 2014 for a totally different issue, years before the pain got rapidly worse and don’t listen. That one even had some minor issues back then too.
Never got the appointment so I bet he is calling to see if anything changed, which it had. Probably trying to get out of seeing me as that is how he acted the first time I spoke to this very rude man.
I do find the MSK/orthopaedics staff usually really rude. The ones I have seen at least. Also the last one I saw some years back, was horrific at his job and said lies such as “you have to have the pain hurt to get better” “push yourself to where it is really painful so that the pain gets less”. This was to me, someone with horrific, very severe chronic pain. Lots of other bad advice too that I have been told and I know myself, is dreadful and dangerous advice,

Last appointment is just my regular doctor for my 3 weekly appointment.
Hopefully can get something else for the buttock/sciatica pain. The opioids I have for my back don’t help my buttock pain.
The doctor last time gave me Baclofen for the sciatica which doesn’t do anything and the pain is now worse. I think upping the Amitriptyline might be a better option as it helped a little originally.

I really hope these appointments get me somewhere. I need more tests for the chronic pain. Positive autoimmune, septal perforation, chronic pain and chronic fatigue scream loudly to diagnose an autoimmune. The perforation and the pain getting worse at the same time clearly says something is there. Please can they just diagnose something as most autoimmune have a treatment plan. I know it’s all permanent but clearly there is something I have that they won’t bother to find out due to it being on the NHS!
I would love to be able to afford private doctors where you get tests and diagnosis! Where I live on the NHS, you get nothing! Postcode lottery.