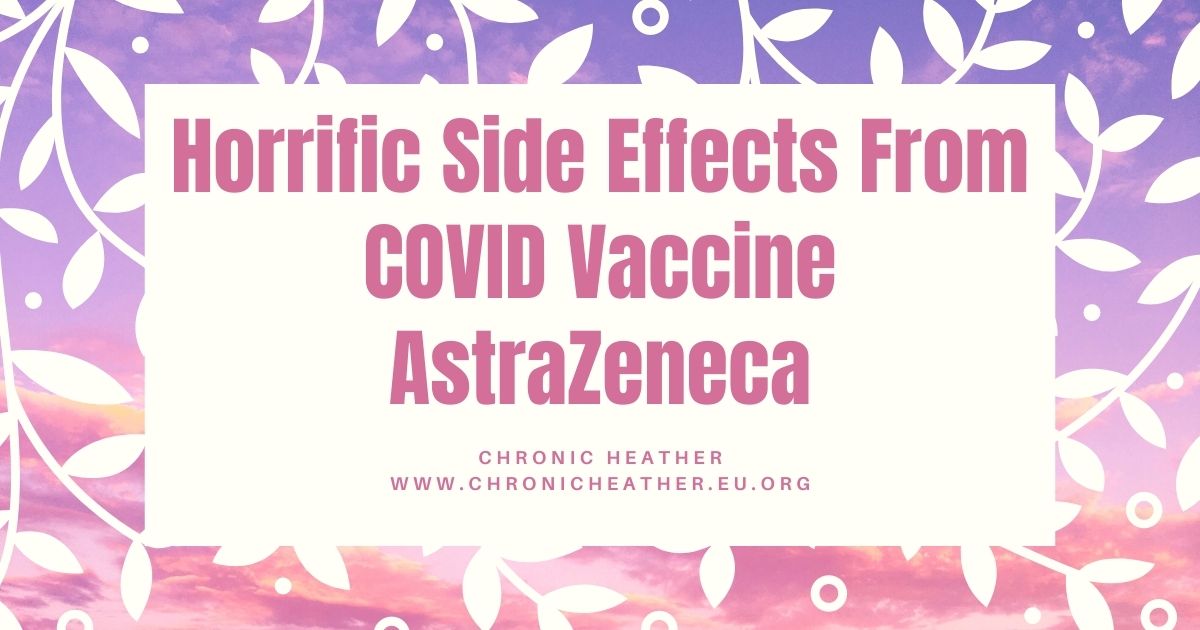 Firstly for background, I have chronic fatigue, chronic pain and many more conditions as shown on the about me page

I had my first COVID AstraZeneca vaccine on Tuesday. Another in 12 weeks. I had no real issues that day.
By the very early hours of Thursday morning, my arm was killing and I had a migraine. I went back to sleep.
I awoke on Thursday morning later on with the worst migraine, horrific pain all over, incredible stiffness, hot and shivering, my skin hurt to touch even lightly, nausea, I was more tired than usual and I couldn’t hold my head up as it was too painful! My arm hurt obviously, but both did and I could barely move either!

The pain was so much worse than my usual pain, the fatigue was worse, stiffness was worse, everything was worse!
I could barely move an inch. Getting out of chair or bed was so difficult and took ages.
Horrific side effects, much worse than I heard of!

I had to take morphine, sumatriptan, metoclopramide and sleep 17 hours that day.

I went to bed and slept 6 hours in the day even though I had 11 hours that night as I do every night as due to chronic fatigue I need a lot of sleep to be able to remotely function.
In the evening, I drifted off to sleep while sat downstairs trying to eat as I could barely eat a thing.

A while back on Twitter I had asked people with chronic pain and/or chronic fatigue what side effects they had and some had bad symptoms for a while, so I did expect the worst. Of course with my bad luck, I had it horrifically.
My pain is 10/10 as it is, 8/10 with the Fentanyl, but it was a 10 again and everything else was worse too making it so I could barely move an inch, lift a drink, anything!

Second in 12 weeks, no date yet but dreading that!

2 thoughts on “Horrific Side Effects From COVID Vaccine AstraZeneca”