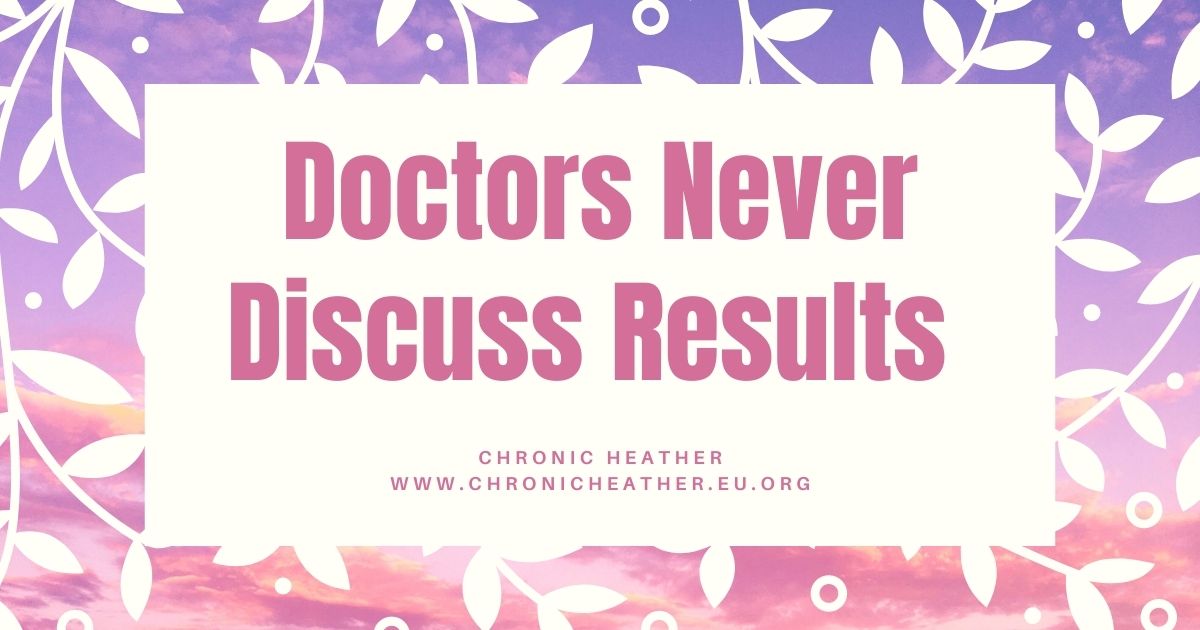 I have numerous chronic illnesses and health issues as you know.
In all the years since I have had them, in numerous doctors GP clinics and different GP’s in each clinic, no doctors ever want to do tests for anything I have wrong. It has been this way for over 20 years.
I have to ask and ask and ask for tests or diagnosis but they always ignore me or make excuses why I can’t. When I get the tests after begging for years, they always show something, i.e they always show I am right and they should have done the tests years earlier. Yet if you get positive tests, they don’t send you to anyone for any diagnosis or any other tests. It just ends there! So stupid!!

GP’s in the UK don’t know much about chronic illnesses nor long term health issues other than basic info, as GP’s are really more knowledgeable for basic easy to fix things. That is why they are supposed to refer you to a doctor at the hospital for specific things.
I asked for decades before it was even diagnosed as chronic pain for tests but instead they just sent me to physio. Physio being someone giving you a list of stretches to do that don’t do anything….
I was sent to physio about 5 times over the decades before it got massively worse. They not once did any tests or any referrals. The pain didn’t respond to physio and I told them and the GP this but they loved to send me there. Probably to get me away from them.

Anyway, in 2014 I had another pain issue which appeared out of the blue. I would have unbearable pain lying in bed and I couldn’t get up out of bed. I was too stiff and too much in pain.
The GP sent me to rheumatology. They sent me for 2 MRI’s on my lower back and lumbar region. Other than minor things showing, the MRI’s were fine. The pain went away after a few months.
This was not the chronic pain I have now. This was something else that I don’t have anymore.

The MRI in 2014, 3 years before the chronic pain got really bad, was the only one I ever had until August 2021 when I got another one after years of asking for a new one, as all doctors would look at the 2014 MRI’s and use that for reference about my pain even though in 2014 my chronic pain actually wasn’t too bad. It was there all the time but wasn’t extreme like it is now.
It took me 4 years to get a new MRI after the chronic pain started as no one would do any tests of any form for my chronic pain.

When the pain got so bad I could no longer walk far or stand long and became bedbound due to the severity, then they started listening but again still not testing for anything.
I was then sent to a muskokeletal clinic where the guy tapped my elbows and knee with a little hammer and said I seemed ok and said I can’t have a new MRI, even though he himself and all other doctors all used the old MRI’s from when the pain hadn’t got really bad yet.
All doctors would look at the 2014 pre severe chronic pain MRI and use that. I would have to keep explaining that is before the pain got rapidly worse and was taken for a different issue.

I fought hard for over 4 years for autoimmune blood tests. I asked and asked repeatedly for over 4 years. They said no as no reason to even though there was lots of evidence I have autoimmune issues. When they came back, to no surprise to me, 4 were positive:

The GP doesn’t do anything about these though! I was referred to rheumatology for the SCL-70 but he just checks my skin over for 2 minutes maximum and sends me on my way. I am not exaggerating. I was in there 3 minutes last time. I was shocked. He stood up and took me out while I was still talking to him as well. Disgraceful.

Had another MRI last month after fighting since 2017 for one, but no one tells me the results again. No appointments have been made to get my results either.

So I am still where I was. No tests and if you get them they don’t do any other tests to find out what the issue is!
The battle never ends…