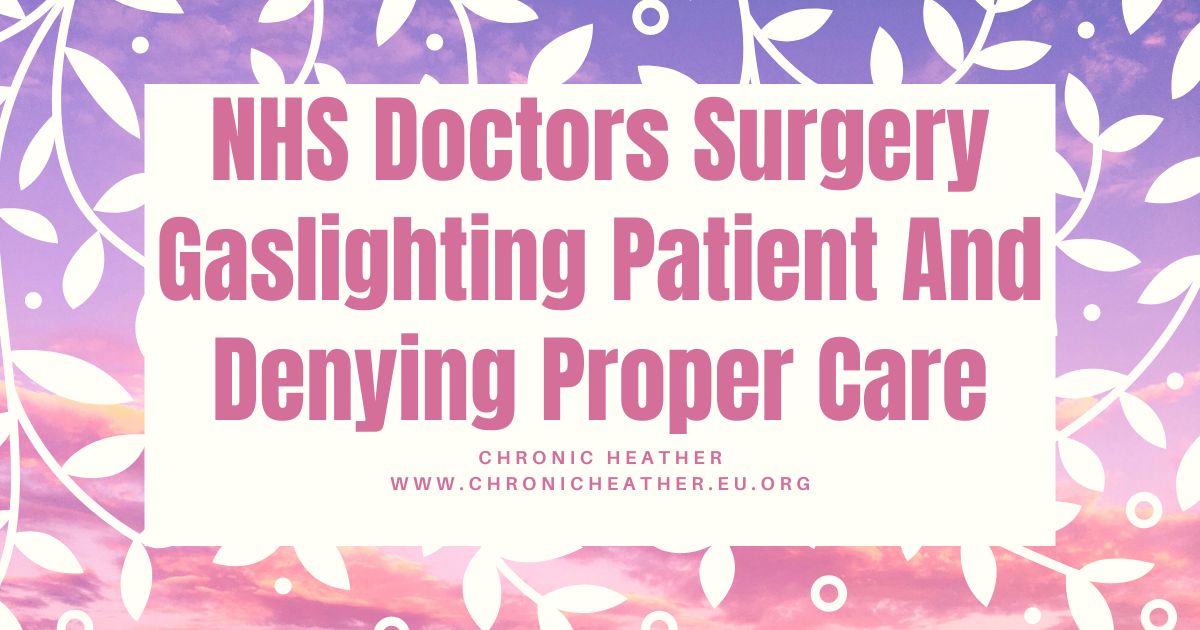 I just experienced my GP shouting, gaslighting and getting angry at me, the reception staff treating me badly, plus the staff clearly not trained enough or just incompetent as you will find out when you read on.

Just another day trying to get the care I should have got years ago!

I was trying to get prescription exception as I qualify for being housebound and unable to go out without help.
I have been eligible for many years but the GP’s wouldn’t approve it and they have to in order to get it.
I was wrongly told I couldn’t get free prescriptions for 3 years now which was a lie as I qualify.
Each time the GP and staff said they don’t know what qualifies you which is shocking as it is on the NHS site and on the form that I filled in!
This year I thought I am not backing down. I am eligible and I am getting it!!
I shouldn’t have to fight to get what I am eligible for, but in England you have to fight to get what you are entitled to.

I speak to my GP every 3 weeks as you may know.
I do this as I am using Fentanyl off label, i.e more often that it is supposed to be used so I need monitoring.

This time my appointment was about how I am doing but also regarding prescription exemption as I shouldn’t have to pay for free prescriptions.

I had filled in the exemption form and it was dropped off at the doctors surgery.
The next day I got a text saying I am not eligible and that was it.

I called up, annoyed and disappointed and was greeted by the worse receptionist at the surgery.
She is moody and is often wrong and says things that aren’t true.
She said that I don’t have a housebound tag (not sure why that is my issue) and I am not eligible!
I said “which doctor said that as my GP knows I am housebound”
She didn’t reply.
I said “My GP said he doesn’t know the reasons that make you exempt and I really am not being rude but you don’t seem to either”
She replied “I don’t know the reasons you are right”
I said “do you have internet access on your computer”
She replied “yes”
I said “please just check the NHS website or look at the exemption forms behind reception”
(Because the forms and site state clearly that you are eligible if you “have a continuing physical disability that prevents you going out without help from another person and have a valid medical exemption certificate.”)
She said in angry voice “I can’t as I am on reception and manning the phones”
(There is 2 on reception as I could hear the other answering the phone too…..)
I said “check the form right behind you on reception” (The forms are literally 2 feet from reception)
She replied in a grumpy voice and then sighed “I am upstairs”
Which made no sense as they are in reception. You hear them answering the phones and see them if you go in person.
She said I will have to speak to my GP. This is the GP that said he doesn’t know the reasons!

She made me go through numerous comments on my medical record. She read them out loud as reasons I don’t qualify even though I do. Stupid reasons that didn’t even apply to this situation.

She was rude and she wouldn’t even look! There was someone else answering phones and she made excuses and didn’t take seconds to look even though she was honest and said she didn’t know the reasons, but wouldn’t look at a form.

She also wrote a note on my medical record saying “chronic fatigue is not always permanent so she wasn’t eligible”…. This right here shows their incompetency. I have OTHER chronic illnesses too! The worst being chronic pain. My MAIN condition and they didn’t even look into it!!
Why else am I on Fentanyl, morphine and had cannabis before for it….
I have letters from MSK, pain clinic, MRI unit etc all about my chronic pain and they ignore it completely!

This shows how bad the staff are, but this is the same kind of care in any clinic or hospital around here. It is not a good area for health care and on the NHS it varies MASSIVELY by postcode!

So I had to wait to speak to my GP.

I spoke to my GP before about the reason I am trying to claim for which is because I can’t go out alone without help. He didn’t even know that existed. He said I don’t qualify and that isn’t a valid reason. This was last year he said this which was a lie but he wouldn’t sign it even know he knows I can’t go out alone without help. But he didn’t think that was a valid reason even though it is on the NHS website…..

This time, he called and he went through the “how am I” questions that take seconds. The whole 3 week appointment is pointless but he wants it for some reason. Been doing it about 3 years or so now!

I said I wanted to speak about the prescription form and the housebound tag.
This is the GP I speak to every 3 weeks. I tell him everything and he doesn’t log most of it and never remembers anything.

I said “the lady on reception said that I had to speak to you as she said I don’t qualify, but I do as I can’t go out without help which you know too”.
He said “yes I know you can’t”
I was thinking, great he is listening, but then it changed rapidly.
I said “I also don’t have the housebound tag apparently”
He said “that is just for those who are really housebound”
I said “I am really housebound”
He then said “an example, think of aa quadriplegic. They can’t go out at all so are housebound. But you had a Covid jab in person so you aren’t eligible”
I said “I had help and am partially carried too and then wheeled about as I can’t walk”
He then got angry and shouted at me which I was astounded by!
He said, shouting “NO you could go out with assistance so you aren’t housebound, but you are for the prescription exemption”

This went on and on with him shouting, gaslighting and getting mad at me just for asking a question politely.

I was really confused now and annoyed he shouted at me like a child. He said I am housebound but I am not?
He is trying to say that because I can get wheeled and carried that I am not housebound enough for a housebound badge so that other staff know I am housebound, but I qualify for the prescription exemption….
Contradicting himself and belittling me!

I AM housebound. He agreed on that. But just because someone can CARRY and WHEEL you about in a hospital doesn’t mean you aren’t housebound!
I haven’t been out in about 3 years for anything but appointments I can’t do over the phone such as Covid and MSK clinic. I don’t walk there or to the car, but because they didn’t come out to me, I don’t get a badge.
He shouted at me for 4 mins to tell me that. SHOUTED. A doctor shouting at me!

So he is either signing the prescription exemption that I filled in or he is signing a new one that I have to sign. I have no idea as he didn’t make it clear! He didn’t explain at all. He was too bust shouting at me for asking about a housebound badge.

Every single receptionist says “you need a housebound badge so we know you are housebound” but I can’t get one even though the GP said I am housebound!
The GP referred to quadriplegic as properly housebound… Then what am I??

He can’t call me housebound and not housebound in the same sentence! If I am housebound enough for the prescription exemption then why can’t I get the housebound badge??
This is the reason I have to keep turning down appointments to get them changed to telephone because the staff don’t know I am housebound as he won’t ok the badge!

I haven’t been out in about 3 years and before then I was still disabled and barely able to move!
I am housebound and trying to get a wheelchair so I can actually go out, but that doesn’t get me a housebound badge?

You shouldn’t come away from speaking to your GP that speaks to you every 3 weeks, crying and upset because of how you were treated!

I was polite from the start as I always am to them but they treat me like something on their shoe.

Gaslighted and spoken to like trash by my GP and the surgery for trying to get care that I qualify for.

Receptionists and GP saying and writing wrong information on my medical record with no care in the world.

How can you be told you are housebound and need help to go out, but can’t get a housebound badge?

Plus the lies and incompetency from the staff is unreal!
I did tell you how bad care is where I am. It is the worst!