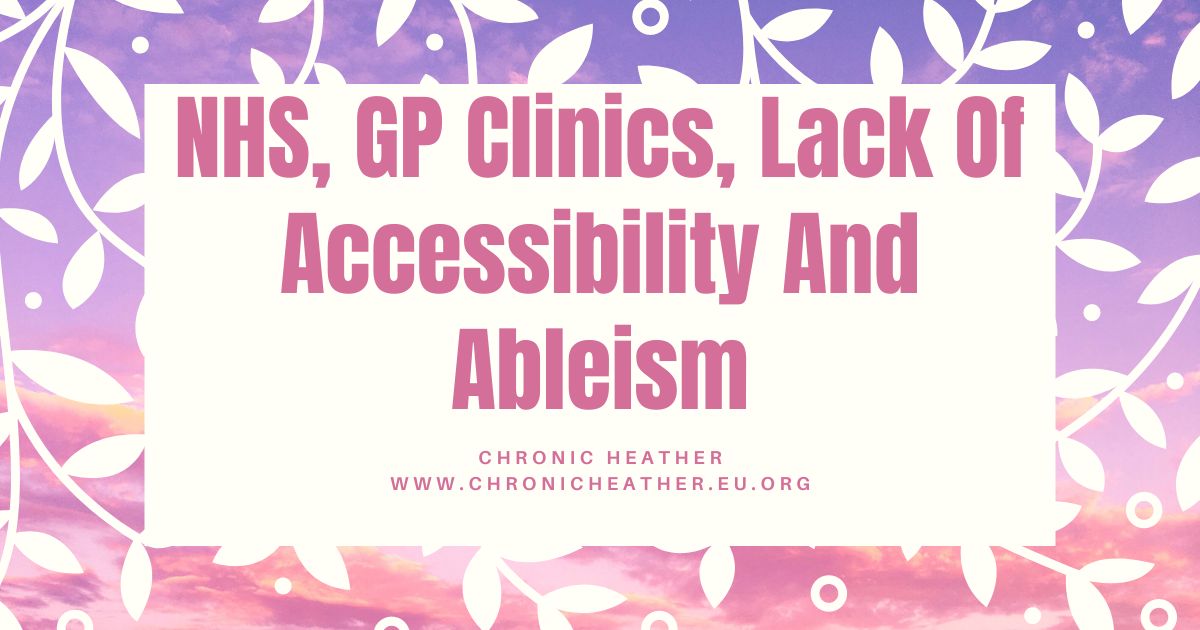 You would think the NHS and GP clinics would be accessible and follow the equality act seeing as it is UK healthcare and has millions of disabled people as patients.
You would think, but that isn’t my experience, nor is it the experience of many other disabled.

I have numerous examples of the fact they are not accessible in many ways but I thought I would share this which is still ongoing right now. This is pretty shocking and something you wouldn’t expect to hear about the NHS and doctors, but this is just one of many experiences I have had. I have had much worse too!
It shows the lack of accessibility, the really bad staff and also the ableist comments from my GP and other doctors. This is the type of bad experience I get on a regular basis.

I recently had to sign a form to prescriptions.
I was forced to go down to the doctors in person to sign a piece of paper. This is the only way apparently. Has to be a form and I have to do it in person…
I struggled to arrange it as I don’t have a car and am housebound as you know.
I signed it and took a few days afterwards to recover in bed as it is that hard for me.

I get a call to say I am not eligible by a receptionist.
Yep a receptionist makes the decision there. Without looking at my medical records either as apparently she thought I had just 1 medical condition.
I am baffled because I speak to my doctor every 3 weeks and it shows I have chronic pain and chronic fatigue plus other conditions, and am opioids and many other medications. She just thought I had chronic pain… Honestly appalling!

I call and ask them to speak to my GP. One of the rudest and worst receptionists refuses. I asked if she herself knew the reasons for exemption and she said no!! My GP also said no to me many times too. I ask her to look at the NHS website or the form so they can see the reasons and she refuses. She refuses to find out the reasons and won’t look at eligibility reasons but she sticks by I am not eligible.

I speaks to my GP and of course he says I am after I explained the reasons.
He said he would sign it and leave it on reception.

I asked for the housebound badge on my account too as receptionists say I don’t have it.
The doctor compared me to a quadriplegic and said I am housebound, but not housebound enough to get a badge. I was shocked at this point and was lost for words. I went silent on the phone as I didn’t know what to say.
How dare he do that. How dare he! This is the GP I speak to every 3 weeks and have for about 4 years now. I was in tears at his ableist comment. (This is just one of many examples of ableism from him and other doctors)

He said he would sign it and leave it on reception.
I realised the next day that he didn’t say if he signed mine or a new one after I was initially wrongly refused, so I called the clinic.
The receptionist said that they don’t know what gets posted so unless someone calls me, I should assume it was sent out.
I found this odd but relieved that it must be sorted.

A week passes and the NHS don’t have my form.
I call the reception again and get told that they add a note when they post out forms. This completely contradicts the other receptionist. (This happens a lot. Different staff say different things and 90% of staff don’t seem trained)
I get told I have to go down again to sign the form all over as they lost it. The receptionist refuses to accept they lost it and when I say that she says “I never said that, don’t put words in my mouth, I never said it was lost”. So I said “but you don’t have it and you did so it is lost”. She was obviously refusing to accept they lost it nor say it over a recorded line I reckon.
I said I am housebound and can’t go out. She says I HAVE TO sign it in person.
I am in tears and so much pain and fatigue from this at this point. No money and no car to get down.

I managed to get down after being carried to the car for a second trip down to sign the same form after they lost it.
This time it is posted out and a note on my record to say this.

Although there is a note before this from the same receptionist that refused my application the first time who keeps commenting on my record about how I have chronic fatigue and that can change so I am not eligible, and how the medical notes they made contradict each other.
So basically she still isn’t seeing my other conditions which are clearly on my record and still is trying to refuse me the application even though the GP approved it!

By this time I have signed the same form twice, been forced down twice even though housebound.

Another week passes. The NHS still don’t have it! So this time it is lost in the post!
And this is where I am now.

I have to go down AGAIN for a third time to sign the same damn paper form!!

Talk about lack of accessibly, ableism and breaking the equality act all in one story.
This is how the NHS and GP’s are.
I have experienced the same things with many other doctors in various areas of the NHS and also GP clinics too. Ableist comments that hurt so much and shouldn’t ever be said by medical professionals to patients!
Lack of accessibility is common too. Even though telephone appointments are more common purely because Covid happened, the NHS is still very disability un-friendly.
It is sad that it took Covid, something to affect everyone for accessibly to be more common.
But in the case of forms, accessibility is none existent. They won’t do anything differently for that!

Why do I have to go down in person to sign a paper form 3 times?
Can’t they scan it and email it?
It is 2022 and the NHS still love paper forms and accessibility is lost with them as they make you sign them in person. This pretty much breaks the equality act as where are the reasonable adjustments?

I need around 3 days in bed to recover from being carried to a car and struggling to get to the GP all to sign a form that I signed twice, soon three times.
A form they post off in a prepaid envelope…

I am so upset and fuming at the same time.

Why does the NHS and GP’s still love paper so much and why can’t I sign via email or can’t they just scan the form I signed multiple times and email it over?

I speak to my doctor every 3 weeks and have for about 4 years, plus see other doctors at hospitals etc.
If I could use a private doctor I would in a heartbeat. Anything to get away from the NHS.
I have had nothing by bad experiences for many decades. Malpractice many times, bad experiences every time. I couldn’t give you one good experience! Not one!

Can’t get a housebound badge as I am housebound but not housebound enough to get one as I am not as housebound as quadriplegic apparently! (my doctors words not mine!)
I haven’t been out in years and being forced out leaves me in extreme pain and fatigue, bedbound for many days to weeks just to recover. I am housebound for a reason!

I am housebound. Don’t have a car. No money and the GP is a way away. Yet I am forced to go down to sign paperwork I have signed before multiple times. Forms they lost then the postal service, Royal Mail lost, so I have to sign again for a third time!

I have no words for how ridiculous this is.
There are so many things wrong with this. The ableism from doctors. The lack of accessibility.
Welcome to being disabled and chronically ill in England.