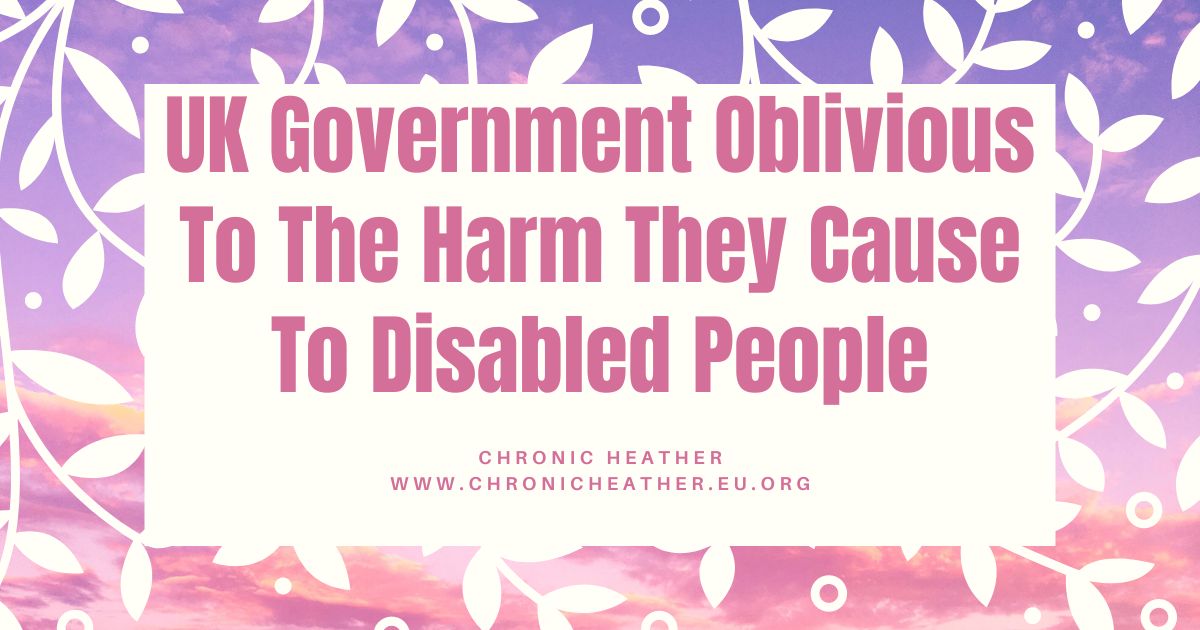 I have never known a time so scary to be alive in the UK as a disabled person.

The UK prime minster was changed from the useless Boris Johnson to the oblivious Liz Truss.

We were promised help, possible freezing of energy prices, but instead we got over a £1k a year hike in energy bills in October up to £2.5k for 2 years. Yes that is better than £3.5k but we were just over £1k a year before so this is a HUGE rise and it is for 2 years!
She didn’t tax the companies like people hoped which was the sensible thing to do as they have massive profits while people are unable to afford heat, like myself.
We are all supposed to be happy with that, even though other countries did things such as tax the companies that are rolling in huge profits.
But alas, we have a Tory government which means they only protect the rich.

I still will NOT have any heat for at least 2 years. 2 years as that is how long this £2.5k energy cap lasts.
2 years in a house that is rarely ever in double figures and even in a 30c “heatwave” otherwise known as summer, it was 14c inside. In winter it is freezing at around 3c inside most days.
That is unbearable and I suffered last winter and can’t do 2 more but I have no choice.

I am home all day and won’t have heat in winter even though this house is freezing and even now in September, is 8c inside and 10c outside. Imagine how bad it is when it is 0c outside! I know, I suffered last year and can’t do another year like that.
I am freezing and am wrapped up with a winter duvet, a blanket, layers of clothes, dressing gown, hat, gloves and a scarf/neck warmer. This is in September too!
It is so cold and the cold makes my health even worse. The pain gets worse, fatigue is worse and everything is much harder as I can barely feel my toes or fingers.

I could ration heat if I had another heater. Then I could have it on say for 4 hours a day or something.

I have a little heater in my bedroom which I can’t carry up and down the stairs as I use walking aids on the stairs, so I would need another heater in the living room in order to ration heat for say 2 hours a day or something.

Ironically there is no minister for disabled people anymore it seems. We had one for years but now there isn’t one after Liz Truss became PM! See here. That says a lot don’t you think?

Meanwhile here I am on living on just over £300 a month (poverty) which is around £4k a year PIP, unable to get the money from ESA still even though I get credits only ESA and am in the support group.
Will need multiple full years credits to get the money which will take longer as I applied initially mid way though a year.

I will not get the £650 help for disabled people as I don’t have a qualifying benefit even though I get credits only ESA and am in the support group, just don’t qualify for ESA money so I can’t get the £650 help.

Surely in a cost of living crisis, they could have just given everyone on credits only ESA (which isn’t that many people), the money they should get from ESA. That would help so many people! I know I would be helped hugely if I got the money from ESA. Instead I can’t afford to live.

Some people are like “I am broke” but then buy a takeaway or go to the cinema. That isn’t broke.
Or “I have no money” but really do, just not as much as they usually have.
When I said I have no money I mean nothing, zilch, nada! My little over £300 comes in and is gone in seconds on bills, food etc.

The government clearly doesn’t care about disabled people as they show over and over again.

I always say how bad the Conservatives are for disabled people as do millions of others. Are you listening now? Please, for the sake of all disabled people, don’t vote Tory! They care nothing about the disabled and poor. I keep saying this but no one listens. Do research if you don’t believe me, but please at least think about voting or a different party.

What more can I do to survive?

I am doing everything I can and have for years. I can’t do more as I have cut all costs to the minimum a long time ago!

Things I Have Done:

So as you can see, I am doing all I can and can’t do anything more. I have cut back to the bare minimum of 1 meal a day and that is it.

I will be spending at least 2 years without heat. 2 years because they fixed the energy prices for 2 years at over £1k more than I am paying right now which is already 64% and another 32% more than it was last October (increases every April & October).

I can’t work whatsoever and yes that includes working from home which some don’t seem to understand.

I am already torturing myself physically trying my hardest. I tried streaming for just a few hours which is like torture and I need 3 full day days (soon 4 days) bed rest from it. Yes I am bedbound for days from streaming using a controller for just a few hours. That is how hard it is for me to speak/use my hands even though I am just using a controller. But I don’t earn almost anything but I still try although am thinking of stopping totally.

I occasionally share my donation link on social media, not too often to annoy people, but enough so people can see it, although it doesn’t work which I expected as most people I follow and who follow me, are disabled too.
I am embarrassed just posting it. I feel so horrible just posting a donation link or retweeting it. It is excruciating embarrassment and awkwardness. But I have to try as who else can help? There is nothing else so I have to ask people.

I do NOT expect a single penny from anyone, especially at a time like this!

But I know some can help and there are many who want to out there who help others so I post my link in case someone wants to help me.

You can see any donations on my Ko-Fi as all donations show on the homepage so you can see that I got one in September of £5 and before that it was another £5 in May etc. All shows on the site as I am transparent as I can be.

If you want to help for FREE, you can just share my posts or donation links. That really can help and has no cost to you whatsoever.

If anyone does want to help, you can check out my support me page which has a list of ways to help for free or paid. Nothing expected!!

Sharing is free and does help. Costs you nothing and takes 2 seconds if that to click retweet but you might have someone who will see my post who might be wealthy and want to help, so sharing does help.