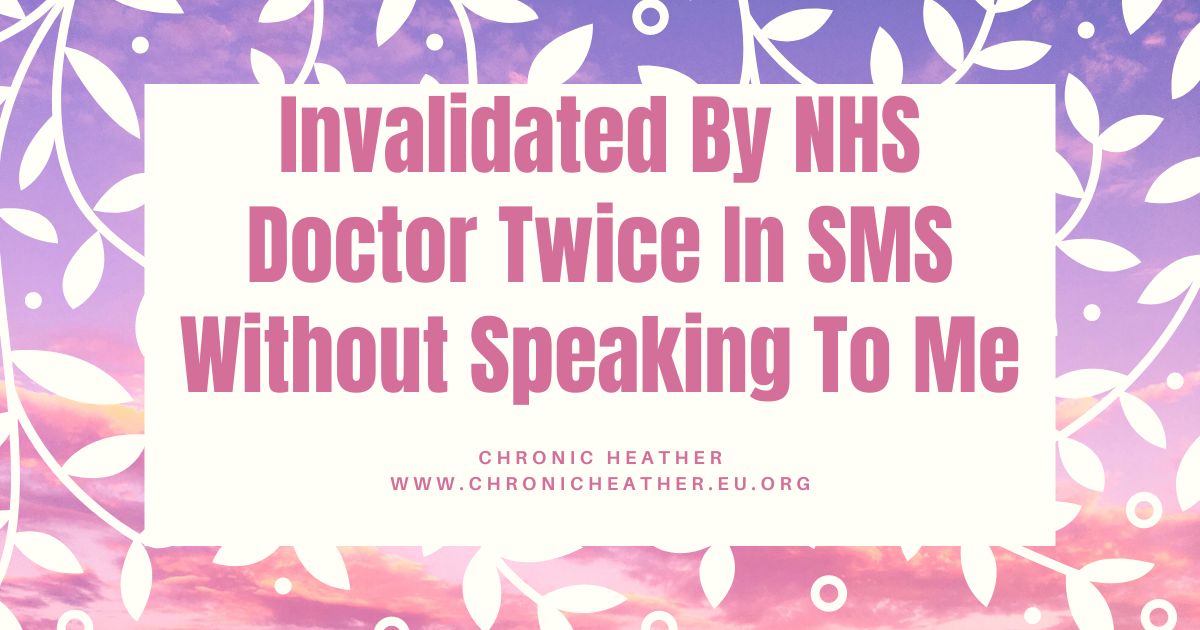 I have never felt to so invalidated and ignored by doctors than I do with the NHS ones. You have seen some of the big issues that I have had over the years such as the malpractice from the pain clinic doctor. Remember that?

Here is the latest farce.

I have been trying to get a referral related to my disability by my GP.

Back in May they did it but they did it wrong. I chased it and went back and forth for months due to what I can only see as incompetence. But I digress, that isn’t the issue.

I was told I would be called about the referral yesterday and have a discussion with the doctor.

No one called and instead I got a text from the doctor which invalidated me they would look in my medical records at the rheumatology report and pain clinic report but they can’t see that I qualify.

This is without speaking to me at all.
It was looked at by a doctor who has never seen me.

Plus, if you remember from my posts in 2020 (you can find them here and here), the pain clinic was so bad I had to make a complaint and had a had a whole case against this doctor at the pain clinic who wrote the opposite of what he told me on my record, lied to my face and made up conditions and symptoms I do NOT have!
Yet the doctor read his notes and used that as a decision?!? This doctor literally had a trial at work over this and was told he broke rules and needs training!

I speak to my doctor every 3 WEEKS and am prescribed the strongest opioids going, Fentanyl and Morphine for my chronic pain. I also have severe chronic fatigue which they don’t do anything for as there is no cure so there is almost nothing about it on my record other than me saying every 3 weeks that my chronic fatigue is worse or the same etc.

I was so upset to be invalidated by someone who didn’t even speak to me or know me!

I called the doctor and told the receptionist that I was upset (as I was literally crying) and asked if they could add a note about the chronic fatigue which won’t show on record as there is no appointments for it.

The receptionist then told me that they had changed the appointment to next week without telling me.
She was confused too. She said that the doctor would talk to me then about it. So I said ok and waited.

Anyway, today (not a week later, just 1 day) I get a text even worse than the last saying “I looked through her records and cannot see why she would need this so I cannot give the referral. There is no medical need.”

I burst into tears and am crying as I write this now.
Talk about invalidated!!

I have SEVERE chronic fatigue and SEVERE chronic pain which leave me unable to do anything and disabled.
I can’t even pour tea without using an aid as I can’t lift the kettle!
THAT alone shows need, but as this doctor doesn’t know me and each 3 week medical appointment is pretty much just “she is still coping”, there of course isn’t going to be much there! Plus looking at totally unhelpful records isn’t going to help, speaking to the patient will!
I am also barely ever spoken to about my chronic fatigue as there is nothing they can do, so there is literally almost nothing on my record about it even though I have had it DECADES since I was a kid and no one asks about it ever. I complain about it but they ignore it or blame my chronic pain instead…

I called the doctor again and spoke to the same lady on reception from yesterday, who was lovely and understood totally and she said “I even added a note about the chronic fatigue yesterday”.

I said “I am seen every 3 weeks by my doctor and have for years due to my health and medication. Just because my chronic fatigue is barely ever mentioned on there isn’t my fault. There isn’t much to put and the doctor isn’t going to write “still has chronic fatigue” every appointment”. She said “I understand totally”.

So I will see what happens and update this post.
But I am so fed up of being treated like this by NHS doctors and GP’s. Invalidated totally by people who haven’t ever seen or spoken to you!

You have to speak to a patient about their health! You can’t just read notes and go off that when they have such little detail! There is almost no detail in their notes at my GP at least, and the same at the last clinic I went to. VERY brief and misses out most information. It is like selective hearing.

Worst part is that I am treated like I are making it up with the way they they sometimes reply or talk to you, even though there are decades of notes on your medical record, but they are so brief, they miss most things off. Plus I spend ages going back and forth which makes my health worse too!
The Fentanyl, the Morphine, the 3 week appointments etc.
And they don’t have the decency to speak to me, the patient about a referral that has dragged on since MAY!!

I hate the NHS so much. Many other chronically ill people in England will tell you the same.
Sure the idea is great, but if you have chronic illnesses or anything that is complex and not a broken leg or something plain and simple, you probably will have horrific experiences.
I have had doctors commit malpractice multiple times. And the ones the lie, make things up and say the total opposite in your records of what they told you to your face. Awful. In decades of seeing doctors all the time, I haven’t had a good experience once. Always issues, often really bad to the point I have to go speak to the department for complaints called PALS.

Underfunded and a lot of the bad medical staff don’t get sacked as they don’t have enough so they just train them or tell them not to do it again, and keep them on.
I know this as I even had a member of NHS staff tell me this about a doctor after my last complaint about the pain clinic doctor. She didn’t name names. She said that one doctor committed malpractice “just like this case” (her words) and there were various issues, but they trained him and he is still working there. She said they don’t have enough staff to sack them unless it is very severe. Her words.

On the 25th October, I spoke to my doctor as I do every 3 weeks, and I told him that I was refused the referral because they claimed “there isn’t any evidence you need this” yet my doctor was shocked and said “I would say there is lots of evidence, so very surprising. But don’t worry, I will sort this”.
He is going to sort it for me. He was completely surprised that I was refused as he and I both know there is lots of evidence every 3 weeks!
The doctor that refused me didn’t speak to me once and never has in my life, and purely read rheumatology reports which is not about chronic pain or chronic fatigue, and the pain clinic report. You know, the one where the doctor committed severe malpractice and the whole report apparently has a banner on with the information that that doctor lied.
Yet the doctor that was going to do the referral read these 2 reports and not the thousands of 3 weekly reports going back years and the reports of me being bedbound screaming night and day before I got the fentanyl. Shocking!
Doctors like that need training I think. Mandatory training when they mess up. But they don’t get any punishment at all. Not even the one that committed malpractice.