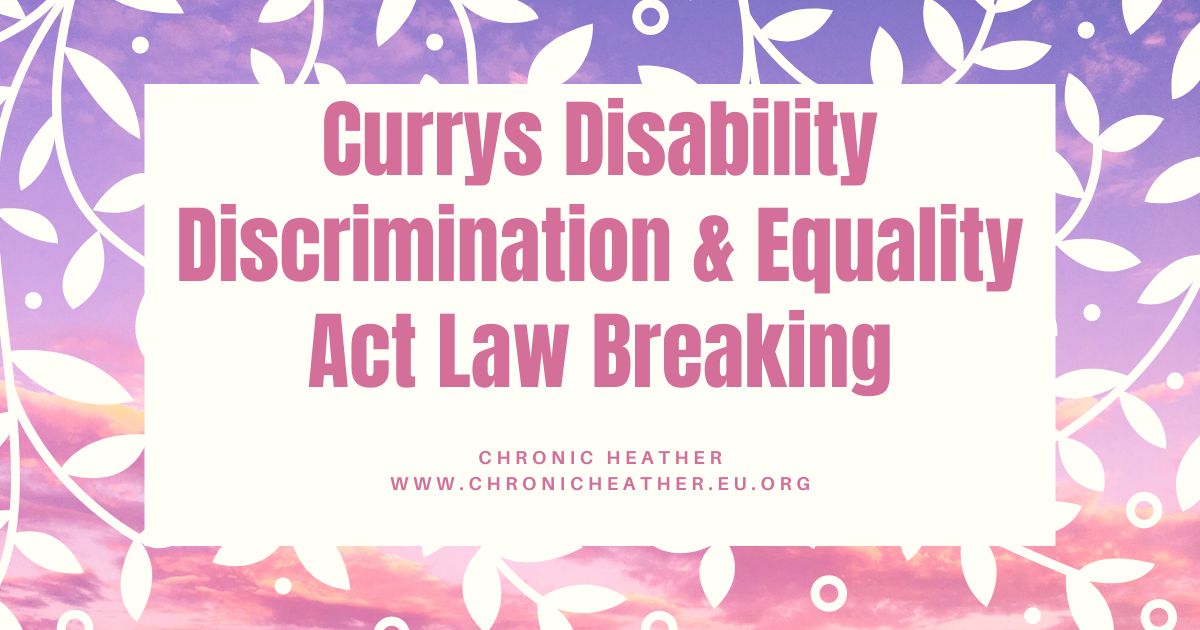 I have never been so badly treated by a company as I have been by Currys and it is so bad that I honestly suggest everyone avoids them for the discrimination to disabled people. Read this and you will agree!

I even spoke to Citizens Advice and the Equality Advisory & Support Service (EASS) who both were shocked and said I could take them to court over this.

All of this was because I wanted a way to contact their team that wasn’t the phone as I couldn’t speak at all due to my chronic illnesses which often leave me unable to speak for days to even weeks.

You may know my fridge broke at the end of 2022, which was a Currys own brand one.

I spoke to them on social media and emailed them asking for an alternative way to contact the white goods team other than by phone as I was unable to speak on the phone to them.

I specifically asked for reasonable adjustments as per the equality act, and asked for an alternative to calling as I couldn’t even speak due to how bad my chronic illnesses get. If I speak a lot, I have to recover and often can barely speak for days to weeks sometimes.

I was shocked that I was told NO, not once, not twice but almost 20 times by Currys staff on Twitter and via email to the CEO office, and this was just the start!

I gave links to the equality act and reasonable adjustments such as this one on the Citizens Advice website which is specifically for retailers but they didn’t even read the link. They just said the same thing over and over. NO. No to reasonable adjustments, no to any alternative but calling.

I said very clearly that they have to offer reasonable adjustments for things such as alternative ways to contact them as per the equality act. Currys refused which is discrimination AND breaks the law! They literally broke the law all the way up to the CEO office!

I asked for another way to speak to this team and was refused over and over, via email and social media!
I said “what if I was mute” and was told there is no other way other than phone! Absolutely ridiculous!

I even had to email the CEO office and they too are discriminative and ableist which is shocking and surprising!

I won’t post full chat logs, but here are just a few samples, but literally all replies are like this on Twitter and also via email.
All basically say no to reasonable adjustments and no to an alternative way to contact the team without calling. Even after I gave them links to the equality act law and also the one on the Citizens Advice website which is aimed at retailers.

I then spoke to the CEO office and I am shocked at the replies. I even provided proof of ALL chats but they didn’t read them all as ever.

I was shocked that they said that I should have provided proof of disability!! Firstly I was never ever asked for this and I could have provided something, BUT the law doesn’t state you need to prove disability!
And why on earth would I spend so much time trying to speak to this team if I could just have called which I couldn’t as I couldn’t even speak!
Read it below and be shocked.
They lie too!

There is no rule that anyone has to give a retailer proof of disability and I wasn’t even asked for this anyone.
Plus storing said proof would break GDPR law too! They literally just made this up to try to defend themselves instead of just accepting blame.

Then I got this reply which left me shocked and in tears.
This is from the CEO office!

They even lie on this too from the CEO office!

This part hurts the most
“In particular, our staff could have only acted to help a disabled customer if, say, evidence of their disability had been provided previously. In that case we would do our utmost to ensure that, if you got in contact and asked for support again, we assisted you in a manner commensurate with your condition.”

Evidence that I was NEVER asked for? How could I provide something that no one asked me for?
Plus even if I had been, were they expecting me to give them photos of my body? My PIP letter? Either way, this isn’t needed at all for disabled people contacting companies! And how would they have stored it?! It would break GDPR as you can’t just store things like this!
Employers can ask employees of proof but not someone who bought from a shop!

And they said “if I had contacted again they would have done their upmost to provide support?? I contacted them over 25 times in total and was told the same over and over!!

I am utterly shocked.

Remember that all of this is because I wanted an alternative way to contact their team without calling. Called “reasonable adjustments”. Something that Currys refused and is still refusing!

The only thing I could do is take them to court which of course I can’t do.

I contacted Currys PR for a statement, but they failed to give me one.

I would avoid Currys if you are disabled or don’t want to be discriminated against! They break the law!