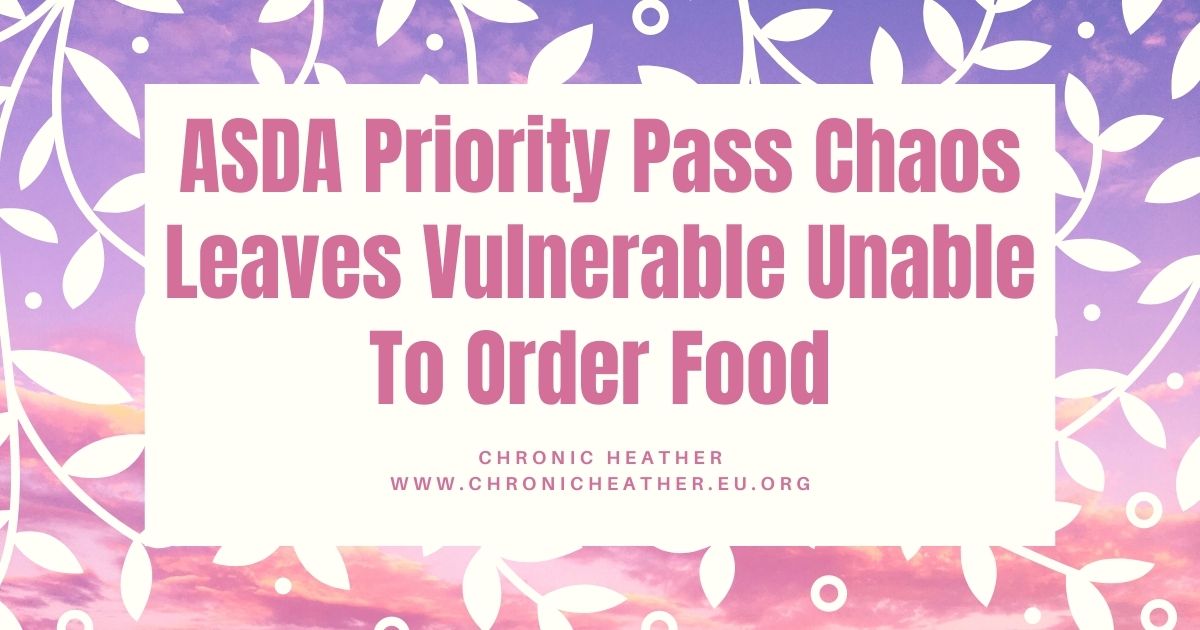 Updated 5th November
They now have sent out more conflicting information regarding Christmas slots with 2 emails with different information on both! Information below.

ASDA recently said it was supposed to be free delivery over £40 from November, below that there would be delivery and minimum basket fees.
Well, now they are trying to go back on that and are saying it is not free delivery over £40 at all! Below is photo proof from the CEO office and website, plus full information.
They are targeting the vulnerable and trying to change what they said. This is not right.

As you may know from previous posts, ASDA have not only broken the equality act by saying that drivers don’t have to help disabled people by unpacking crates and they won’t do anything about it, but had lots of issues with deliveries.

I then got a priority pass which gave me free delivered which was great, even though the customer service was bad. This was for people at very high risk of covid or those disabled. Basically all those they class as “vulnerable”.

Then they decided to change the priority pass from November so you only got free deliveries over £40 and under you paid a delivery and a basket fee.
I was told via the CEO executive team that over £40 is free delivery and no fees.
I felt some relief.

Roll on to November after the change has happened and there was been a bug on the site where people with a priority pass can’t even checkout below £1000 that was there over 5 days. Yes you read that amount right.
That means priority pass (vulnerable and disabled people) aren’t able to order! Slots get missed, people who aren’t able to go out can’t get food.
It seems the bug was added to stop priority pass people getting free delivery on anything. It was there to make sure no one could get free delivery even though it still says free delivery above £40 in many places.
This is on top of another huge issue below!

As I said, the executive team and the ASDA website said free delivery over £40 and fees only if you are below that.
I went onto Twitter after they were telling people that it is not free over £40. I saw numerous tweets over the space of a few hours where different staff members told people both that it was free over £40 and also it wasn’t free over £40!
One even tried to say that there is a fee that you still pay that isn’t the “pick, pack and deliver” charge and is another fee called a slot fee which doesn’t exist! The only fee is a pick, pack and deliver fee which is what is supposed to be free over £40.

Even the website says fees are only under £40 too! (screenshot below in case they change it!)

It seems the ASDA customer service team don’t have a clue at what the pass should give so say whatever they feel like to customers!
One went to ask and was told that delivery is free over £40 which is what I was told.

They haven’t got a clue what is happening at all and are all saying different things. Here is proof photo of that!
Different staff members tell you different things! This is dreadful customer service.
Remember this is just affecting those with a priority pass who are vulnerable and/or disabled as well!

Here is the CEO Roger Burnley’s executive office team saying twice that delivery is free over £40 from November for priority pass holders. Only fees if you are below £40.

And then here is their Twitter saying both it is and isn’t free in the space of a few hours!

This is the website also saying fees are just below £40

Please raise awareness about this. Share the post, tell others, tell reporters if needed but please do raise awareness as this is huge. Not only can we not order anyway right now due to the £1000 minimum bug, but they are trying to change what was said about no delivery fees over £40.

They are saying no free delivery anymore and saying anything else said is wrong. They even said to me that one of the CEO executives that told me it was (as per screenshot) was wrong as is all the other staff saying it was supposed to be free over £40!

For myself who can barely get by on 55p a day, this is huge to me.

I have also added a petition although I am not sure what good this would be in all honesty, but worth a shot.

As of the 5th November they have given out more conflicting information regarding Christmas delivery slots. Two emails sent out within weeks of each other both with different information as per the screenshots!
One says you can’t use recurring slots between the 19th December – 2nd January and the other says between 21st and 23rd December! Big difference! Which is right, who knows!