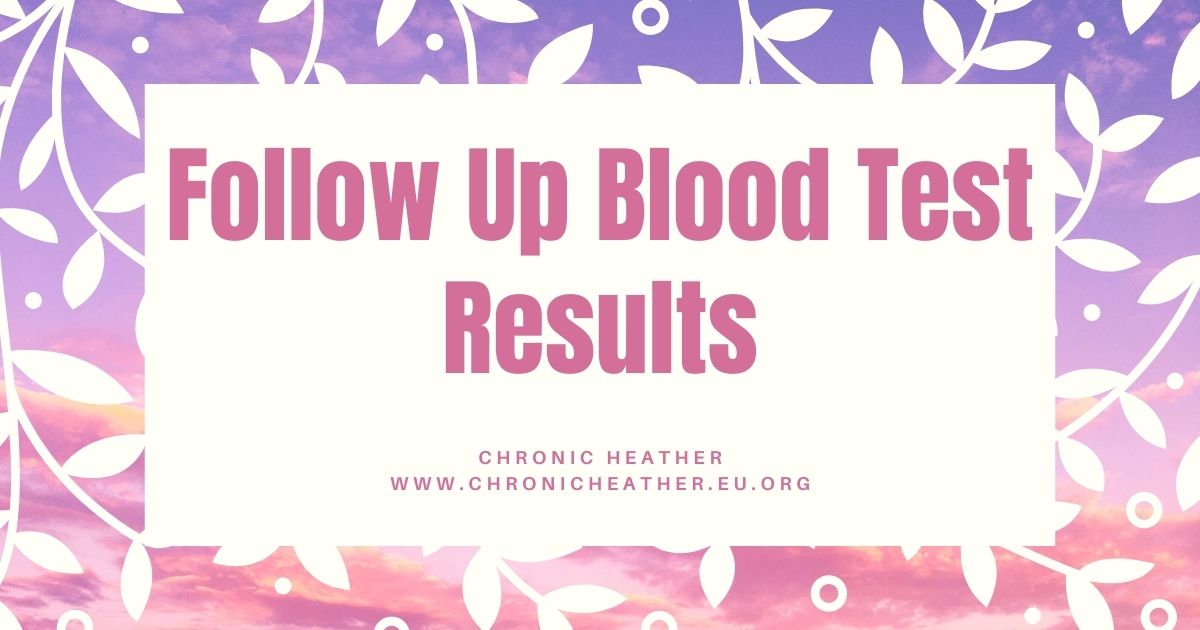 After my autoimmune tests came back positive for four different things (previous blog post), I had another test for liver functions, B12 and folate.

Now these tests were because I had Mitochondrial antibody screening test Positive at 1/100 and Parietal cell autoantibody level Positive.
The SCL-70 AB Blot was Positive but I am being referred to Rheumatology for that, although the appointment most likely will be a long way away!
The ANA was positive also.

I spoke to my doctor as I do every three weeks and he mentioned my pain patches but not my bloods so I had to bring it up! He just wants to retest my liver in 3 months time to see if I have PBC, BUT you can have PBC even with your liver tests being ok! (one was borderline).

As the B12 was ok but he didn’t even mention this. I still have the positive Parietal cell autoantibody level though so not sure why he didn’t mention it, although I am guessing he forgot as I didn’t prompt him for that which I often have to.
This means I have two positive tests still, one where I might have PBC and yet I haven’t been referred for a liver scan or biopsy and the other could still be many other things!
He isn’t doing anything else for that!

PBC is a progressive condition and from a clinical test of 67 patients who had a positive Mitochondrial antibody screening test but had normal liver test results (remember mine had one borderline), they were sent for a liver biopsy and 55 had PBC!
Whereas I am just being told to have another regular liver test in 3 months!
My fatigue got much worse the last couple of years which could be a symptom of PBC.
Most people with a positive Mitochondrial antibody screening test have PBC or early signs of it.

The positive Parietal cell autoantibody test if not anaemia, can be many other things. Especially with the other positive tests, and yet nothing about that and no testing for anything else!

I just don’t understand why with so many positive tests I am just getting told to repeat the liver functions test (not the autoimmune ones) in 3 months.

I could have some autoimmune conditions and nothing is being investigated or being done and the doctor didn’t even mention one after I had another test.
I still have positive Parietal cell autoantibody level and Mitochondrial antibody screening test at 1/100 (which isn’t a low positive either!) and nothing is being investigated other than follow up liver function test.
I don’t even need raised liver function test to have PBC (mine was slightly raised) as I have the positive Mitochondrial antibody screening test! Liver biopsies are the best confirmation.

I speak to my doctor every few weeks so I can bring up again the fact he didn’t even mention the follow up test from the Parietal cell autoantibody level test but I doubt he will do anything.

The sad fact is that they most likely won’t do anything and I will sit on positive tests with no other tests and no referrals.
I know the doctor didn’t know much about these tests as he told be prior he spoke to someone about the condition PBC.

I fought for years to get these tests and when I get them, and they are positive, I am left going nowhere fast with no other tests for the other conditions it can be!!
Ridiculous.