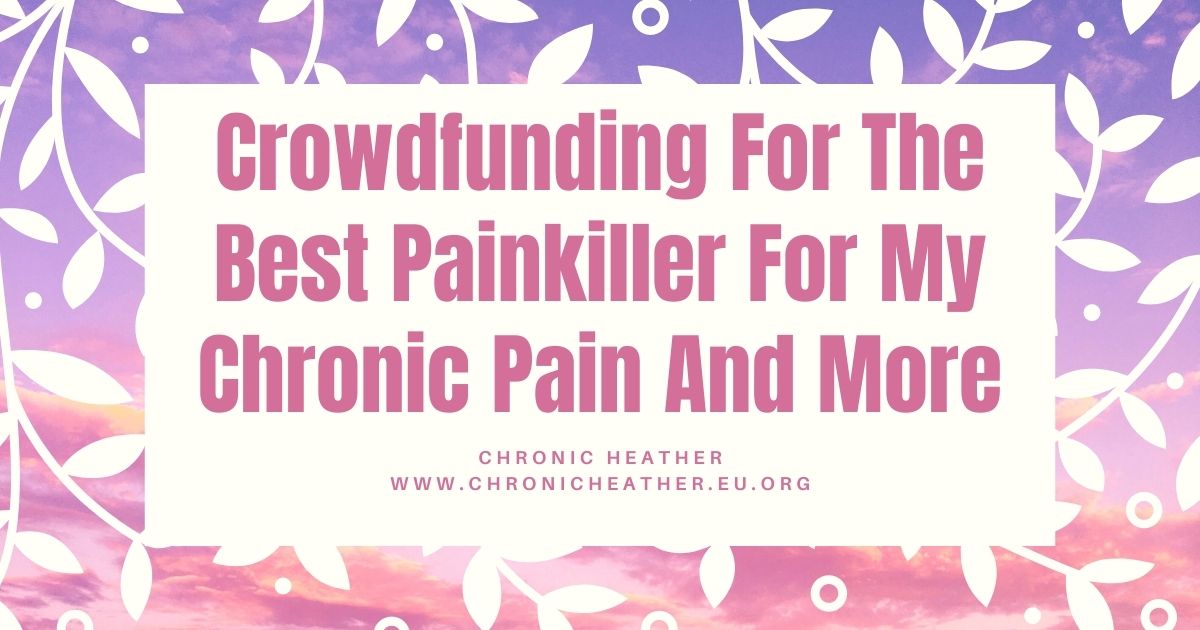 I have decided to crowdfund via JustGiving for medical cannabis for my severe debilitating 10 out of 10 chronic pain without painkillers (around 8-9 with Fentanyl), migraines and sciatica as it’s impossible for me to afford on £300 a month income when I can’t work and struggle to get by as it is. If you can help, please do. Anything helps.
The crowdfund has an up to a year target, as I will never be able to afford it so anything it’s helpful as one month is better than none, but the more the better as I wouldn’t have to worry then.

The NHS medications for all my conditions and the medical cannabis total £209 a month. At £300 total income a month before all bills, food and medications, you can see my problem here! I am literally completely unable to afford this ever!

There are over 3 years posts about my health, money and struggles in this blog for you to see if you need “proof” as I know some wouldn’t help without some proof, but there is a lot on here and also on my Twitter where I post most days and have for over 2 years!

I have had multiple posts about myself in a newspaper, magazine and online!

Cannabis is the only painkiller that works well, no side effects, harmless and safe. It is also medically legal in England which I know some may not know!

My Fentanyl works less and less and the withdrawals get worse and worse. There is nothing else available on the NHS and I desperately need this but it costs money. Money I don’t have living on just over £300 a month.
This is something I desperately need as I can’t go back to being bedbound 24/7 and it is going that way again. I was bedbound at a 10 and am back up to a 9.

I have suffered with chronic pain for over a decade, but it got very bad in the last 5 years to the point I was bedbound at a 10, screaming night and day, plus unable to barely sleep.
The pain is only getting worse.
The painkiller I have works less and less, the withdrawal gets worse and worse plus the pain gets worse as time goes on. I can’t go back to being bedbound. I would scream day and night. I can’t do that again. I was at a 7 a while back with the fentanyl, now at a 9 again. I’m scarily close to a 10 again.

You might already know I barely ever leave the house as I can’t walk far, stand long and can’t work. I live on just over £300 a month which isn’t enough to live on as it isn’t enough for rent anywhere, let alone bills, prescriptions and food as I only have 55p a day for food!! I could never ever afford medical cannabis which at the very cheapest is over half of my total disability income a month! I can’t work so I can’t get anymore money and am stuck living with no money to get by on.

I have tried everything going for my chronic pain over many years, ending at the only thing to do a thing on the NHS which is fentanyl which is the strongest painkiller on the NHS.
I have to change the patches now at 48 hours instead of 72 hours as the withdrawal was too severe, although I still have severe withdrawals between patches which is sweating, chills and my pain is much worse during this time.
I take a medication for the withdrawals but that doesn’t work anymore as your body gets used to it so I am stuck.

I have amitriptyline for the migraines and sciatica, fentanyl for chronic pain, morphine for breakthrough pain and clonidine for the withdrawals between fentanyl patches. The clonidine doesn’t work anymore, the fentanyl doesn’t work as well so the withdrawal and pain is worse and the amitriptyline keeps needing a higher dose over time.
They also all add to my extreme fatigue due to chronic fatigue and the side effects of the medications, making me struggle to keep awake and needing lots of sleep. Even 11 hours isn’t enough, even with extra naps in the day.

The fentanyl doesn’t reduce my pain by much, but makes it so I am not bedbound, screaming night and day. It reduces it from a 10 to about an 8 or even a 9. It is still very high all the time and I am still housebound!

I don’t have good days, I have bad and worse days. The fentanyl also makes my chronic fatigue much worse so I nod off and need 11 hours sleep min and still feel half asleep all day. The fentanyl made this much worse.

Cannabis is medically legal, safe, hasn’t ever killed anyone, non addictive and helps my pain!

I can’t get it on the NHS so I need to get it from a private doctor. The cost isn’t cheap but it isn’t anywhere near what it was like last year which was thousands a month sometimes!

I can’t get out of the house much so a power chair would have been great BUT this helps my pain so much more that it is much more worthwhile for me first. If I had the power chair now I wouldn’t use it much as I need the pain relief more than anything right now as the pain is too high.

I am unable to afford it on just over £300 a month pip as I can’t get ESA due to not having paid national insurance due to working part time previously, as you can read in many many blog posts and in my about me.

The cost is 50% cheaper than if I didn’t go through this project which is a clinical trial type experience where you give feedback and things like that, but where you have to pay for the medication and appointments.

I also have been told I should have oil and flower from the clinic. That would be double the price a month! £300 a month instead of £150 a month. Also I should really have 1.5g – 2g a day but again 2g a month would be £300 again so I am going for the smallest amount that will help at all which is 1g a day for the smallest cost rather than asking for more money.
This is the cheapest price and for the smallest helpful amount rather than asking for a larger amount event if it would be much more helpful with 2 products (oil and flower), purely to ask for the lowest price possible in the crowdfund.

I will be writing a post with information and my review of how it helps me once I get my first month and also of the vaporiser will use.

If you can help, please do. This would change my life. It won’t make my chronic pain 0, but it will reduce it further, help with the stiffness, sciatica and migraines too!

I know I haven’t had any donations on here, but it really would make a difference to my life. If you can help, please do.
You can ask any questions here or on Twitter @chronicheather.

you can donate wherever you are in the world via card, PayPal, bank transfer as long as you choose to donate in pounds. Your bank or PayPal will convert it to pounds. Info here on donating if you are outside the UK.

You can also donate via VibePay in the UK which is fee free from UK banks! No fees for either of us!