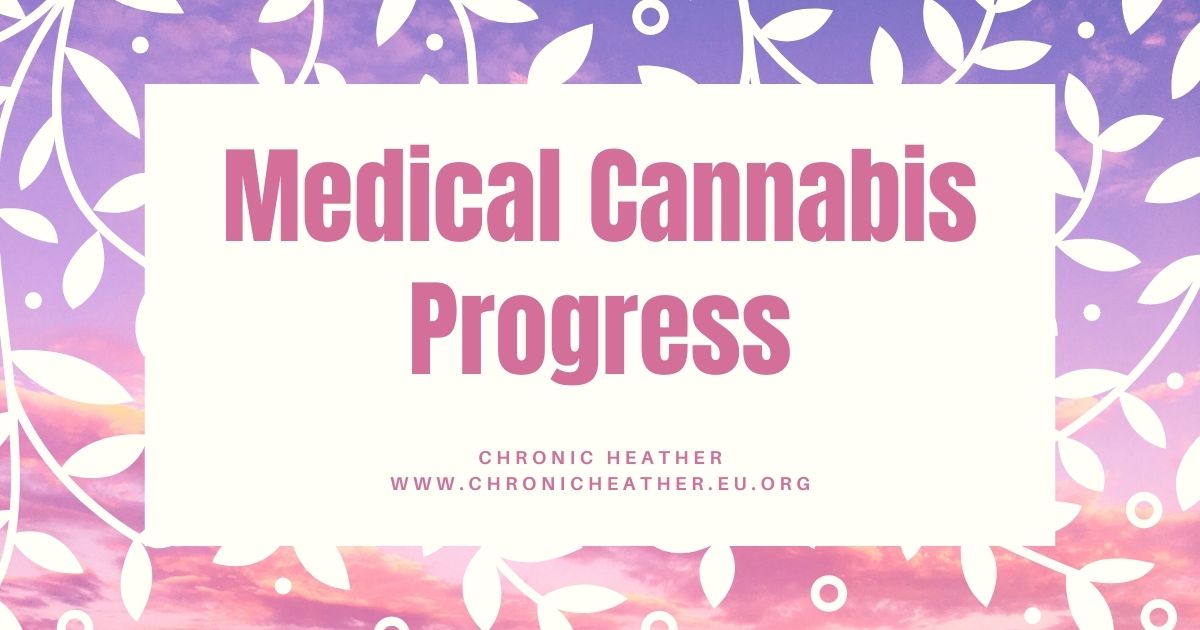 I have been using medical cannabis for a short while now. Legal from my private doctor as I can’t get it on the NHS. This is thanks to my crowdfund which I couldn’t have gotten any without the help of you.
You can still donate if you would like to help. Check out my blog post about it or the JustGiving page.

I have medical cannabis although as you only get what your doctor will give you unlike in places like the USA, so it takes many months and appointments costing £45 a time to get it right. This doctor doesn’t listen so I will need to get one that will.
The cannabis I currently have helps somewhat but nowhere near as much as stronger higher THC flower does and also possible indica over sativa.
Sadly when you get a doctor that seems anti-cannabis in a cannabis prescribing clinic, things aren’t great.

I had some issues with the doctor that was assigned to me at the clinic. The main staff are really nice though. They are new and just setting up the cannabis prescribing part of their clinic so I am also trailing the service.

You can read about my first appointment on my last blog post.

I had to complain about the bad doctor and was told they would look into it and said he might not be a good fit at the clinic. Anyway they didn’t do anything. He is still there. I got a call weeks later saying there are no other doctors I can see other than him so it is him for a few months or change clinic. Yes that is what he said! I felt awful after hearing that. No one should make you have to see the person that emotionally abused you for 45 mins again! I will be referring to him as ‘bad doctor’ throughout.
I was surprised it took so many weeks to say that. I looked and other than the main doctor which co-owns the clinic, there are just 2 doctors for this part of the clinic. 2 doctors. How could it take so long to find another doctor if there is just one other, other than the main doctor that co-owns the clinic.
Last time I just spoke to the main doctor when I was being prescribed so not sure why I can’t just see the main doctor again?
When I was making my second appointment after speaking to the main doctor who said I have to see the bad doctor again or change clinic, the lady booked it in with him but then called to say wrong doctor, it will be the one that treated me like rubbish again which I knew as the main doctor told me. Communication issues there again with staff.

So far the clinic seems to be having some issues but they might be just teething issues. I have experienced many issues with the clinic itself but I am hoping they will get better over time.

The bad doctor sent a letter to my GP with lots of mistakes and rubbish in as I mentioned in my last blog post. Well this got nowhere. I complained and no one replied. Then I was told the main doctor would speak to me about it. He didn’t. He only called to tell me no other doctors available for now.
I chased it again and was told they will write a letter with corrections in.
This is how bad this bad doctor is. The issues never end!

Anyway I spoke to the bad doctor again as the medical cannabis I have been given wasn’t as strong as I need and I was told by main doctor that I could increase the dose at the second appointment. Well second appointment was with bad doctor and he won’t do it! This is the guy that didn’t like cannabis and said lies about it…
So now I have to pay for another appointment for the same prescription as he won’t change it yet even though I have used over 20% THC for over 20 years…. I know what works and what doesn’t. He won’t listen though.
So £195 for a months supply and an appointment with a horrific doctor that does what he wants, ignores you, talks over you and doesn’t listen at all so prescribes the product I just said isn’t strong enough again..

So now have to vape it more often but he won’t change it yet. Remember each appointment is £45 and each prescription is £150!
This is also the doctor that said “the cost doesn’t matter to me”…. It matters to me!

I need a stronger product and also might need a indica as this is sativa and indica is much better for pain.
How many more appointments just to get the product I need and I know which it is from the list as I know what there is available and I know the product I need but bad doctor is bad and doesn’t listen!

Also I was told the first product would be 17-18%. It is 15-18% so they are wrong. More mistakes from this clinic. When you are paying hundreds of pounds, they need to be careful but it is mistake after mistake..

Really poor service. I feel like I am just getting the usual treatment I get on the NHS from the doctors that don’t care or listen and only care about rules and not your pain and suffering.

So many private clinics in the UK are mainly NHS doctors doing things they do on the NHS at a high cost instead. This should be all on the NHS but alas, this country and government doesn’t care too much about people in my situation.

At least I have medical cannabis though! It helps somewhat but not as much as a stronger and different strain.
Hopefully next time he will listen although he is utterly dreadful so I don’t know about that!

It is bad enough I have to see a doctor again that I have a complaint open with for the 2 things he did (the appointment and the letter to GP), but for him to never listen and always say the opposite of the main doctor, is just stupid!

I should have gotten the higher THC flower like the main doctor said I can have if this doesn’t help. When it doesn’t help. I was just doing him a favour by trying it to start with! I said anything under 20% doesn’t work as well on my pain as above 20% and they said I can try this. I only said ok as I needed any flower as the pain is just too bad. But it doesn’t work as well as the thousands of products I have used over the years that are stronger!

Fingers crossed for me that next time they listen!! I can’t afford this as it is so this is just crowdfund money and I don’t want to waste it on pointless appointments and products but I can’t even have a say with this doctor! He is one of those that never listen and they act like they know your health better than you when they don’t!!

If you would like to help me, please check out my crowdfund. Anything helps as it all adds up!