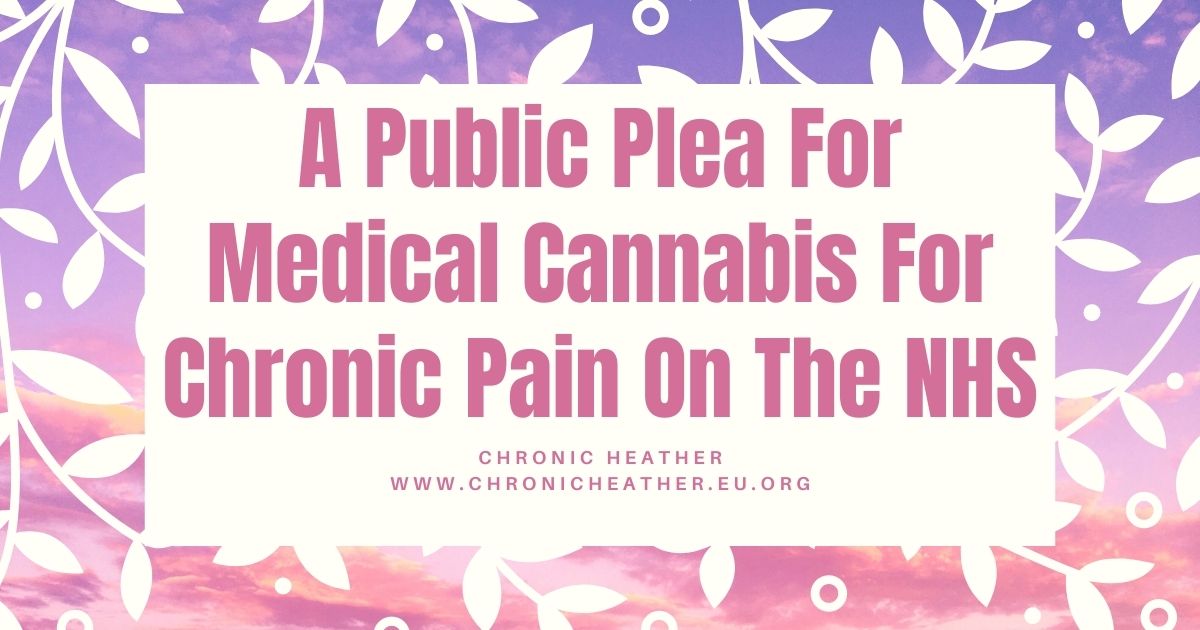 My name is Heather and I am writing a public plea to the UK government and NICE to do something so that people like myself can get a legal painkiller (Cannabis) on the NHS.
I know that they are very unlikely to read this, but I can only try.

To the government and NICE, please change your barbaric archaic rules on cannabis for chronic pain. Allow us to have our painkiller on the NHS like it should be already rather than a case of if you have money you can get it as lots of us can’t work at all because of the chronic pain so we don’t have money!

I tried everything they gave me from useless things that I knew wouldn’t do a thing but I tried everything and nothing helped. Fentanyl helped for a while but the withdrawals are horrible and it doesn’t do much anyway. I can’t come off it as there is nothing else I can use!
So I live like a zombie, sleeping until 11am every morning then taking hours to wake up as they make my chronic fatigue so much worse. The pain is horrific and the side effects are awful.
I know that cannabis flower plus oil right now and I could come off my opioids over time no issues.
I have a 3 weekly appointment with my doctor. The appointments and the medication I am on will cost more for them than cannabis ever would so they can’t say that cost is the reason which is one of the reasons NICE gave for why cannabis isn’t on the NHS for the majority of things.

Cannabis is something that is medically legal in the UK but if you actually want it and have conditions that allow you to have it, you have to pay. It is on the NHS but just for a few conditions and even those that can get it struggle to get it as no one wants to prescribe it. There have been just 3 prescriptions on the NHS for cannabis since it was made medically legal in November 2018.
For things such as chronic pain, you have to see a private doctor and pay and cannot get it on the NHS at all.

For me, cannabis helped my pain massively!
Having spent many years (when I could still work) travelling to legal countries to use cannabis legally for “a pain relief holiday” to reduce the pain as I didn’t want to break the law in the UK so I went to legal places to get it. The pain got worse and I could no longer work so I couldn’t do it anymore.
Now I can’t work at all and have no money living on just over £300 total income a month, I can’t afford the cannabis myself that helps me so much as I don’t earn enough and can’t work to earn more.

Cannabis is the only and last option for a painkiller for me.

The pain relief was wonderful with cannabis, but without it I am at a 8/9 out of 10 level of pain, creeping slowly back to a 10. At a 10 I am bedbound constantly, wanting to die from the pain as it gets that severe!
At 10 I can’t move from bed and scream night and day unable to sleep or get any comfort even with fentanyl and morphine!
Cannabis HELPS me so much but I need money for that as I can’t get it on the NHS. Cannabis is a lifesaver as it would stop me from being anywhere near a 10 out of 10 pain level!
There is nothing else at all that can do that as I have tried everything possible on the NHS. Why should I be punished?
If I have tried everything else, I should be able to get cannabis which is medically legal and I know works!

People with chronic pain deserve to get the painkiller they need on the NHS! After all, that is exactly why the NHS was made!
Instead we have to find money we don’t have so we can get it from private doctors. This literally was the reason for the NHS so why can’t we get it on the NHS?!

I have tried everything single thing on the NHS that could help my chronic pain over a long period of time, and am even still on the strongest painkiller in the country, Fentanyl, which I can get on the NHS but doesn’t work much for me and leave me with severe withdrawals every 2 days. Supposed to change the patches every 3 days, but the withdrawal is so severe I have to change them every 48 hours.
This is so frequent that I have to speak to my GP every 3 weeks!!!

Nothing at all on the NHS for me now. I have to have the fentanyl and morphine as there is nothing else on the NHS for my pain even though it barely does anything and leaves me with withdrawals every 48 hours which is horrible and even more fatigued on top of my chronic fatigue so I need over 11 hours sleep every night and can barely move due to the fatigue and opioids, but I have to have something as without I am at a 10 out of 10 pain which is bedbound constantly and I can’t live like that.
The fentanyl doesn’t do much at all anymore so the pain gets closer and closer to 10 out of 10 even with the fentanyl!
I couldn’t live with it at a 10 constantly. I was bedbound, screaming constantly, unable to get comfy even for a second. Life like that is torture and unbearable but that is where I am going again and I can’t live like that.

Cannabis WORKS for me and is medically legal! But getting it means you need money. And money is something I have none of living on £300 a month as that doesn’t cover living costs as it is!

The UK is a country that make cannabis medically legal but doesn’t let people actually get it unless they have money.
The NHS was made so that everyone had health care, yet for people like me who live on almost nothing and can’t even afford rent, but I can’t get my painkiller unless I have hundreds of pounds a month for it!
How dare you allow something on the NHS for just some conditions but not all?! Severe chronic pain is unbearable.
So many people all over the world kill themselves due to chronic pain and doctors not prescribing the pain relief they NEED. By not allowing it on the NHS you are pushing people towards that.

I need my painkiller that helps me.
So many people including many doctors in this country, do not take cannabis or chronic pain seriously.
They would if they knew what it as like.
It sounds horrible, but I wish that everyone that could change the rules on cannabis would suffer for 1 month with severe chronic pain. Just 1 month so they could see. I wouldn’t wish this pain on anyone, but I would for 1 month on the people that could change the rules as they would if they knew what it was like!
But instead no one cares about people like me.

I live on just over £300 a month total income, can’t work, can’t go out, and live in pain so bad it is like torture. Constant torture that never stops even for a second.
I can’t afford rent anywhere in the country let alone cannabis. I don’t have enough income as it is so I just can’t afford this.

It is 2021. Many countries have legal cannabis for recreational let alone for medical reasons. The UK is stuck in the past still. They won’t do any research for cannabis and don’t look at other studies so we just are stuck!

Cannabis is a medicine. It is also has never killed a single person as it is SAFE too!
If tobacco and alcohol are legal, why isn’t cannabis which is safe unlike the first two! Oh yeah, because the government gets money.. well imagine the money that would be made from cannabis.
The UK simply don’t think like that, they would rather just act like it is heroin or something..

Cannabis is medically legal so why on earth can’t people like me get it?
I would have some form of a life! I wouldn’t be as knocked out all the time and would have less pain and no withdrawals! It would be so good but this country does not put your medical care first. Their pockets come first and patients aren’t really cared about at all. Just read my blog and see my experiences and you will think the same!

If I was a child with severe chronic pain and other chronic illnesses , I would get attention by the press and media. This is a fact. But instead I am an adult with pain so bad that I would rather be dead than live with pain at a 10, and I am someone who always wanted to live forever. So no one cares about people like me….

I have a crowdfund and raised a few months worth which was wonderful but then the money ran out and I didn’t get anymore donations so the money from that has all gone.
Obviously you can’t expect people to help you as they shouldn’t even have to, but without those that donated, I wouldn’t have had even just a few months of pain relief. I just wish I could have it every day like I should be able to!

My crowdfund is still available on JustGiving it anyone wants to help me get my pain relief.
If you would rather help with food and things like that then you can check out my support me page with lots of ways you can help for free or paid.