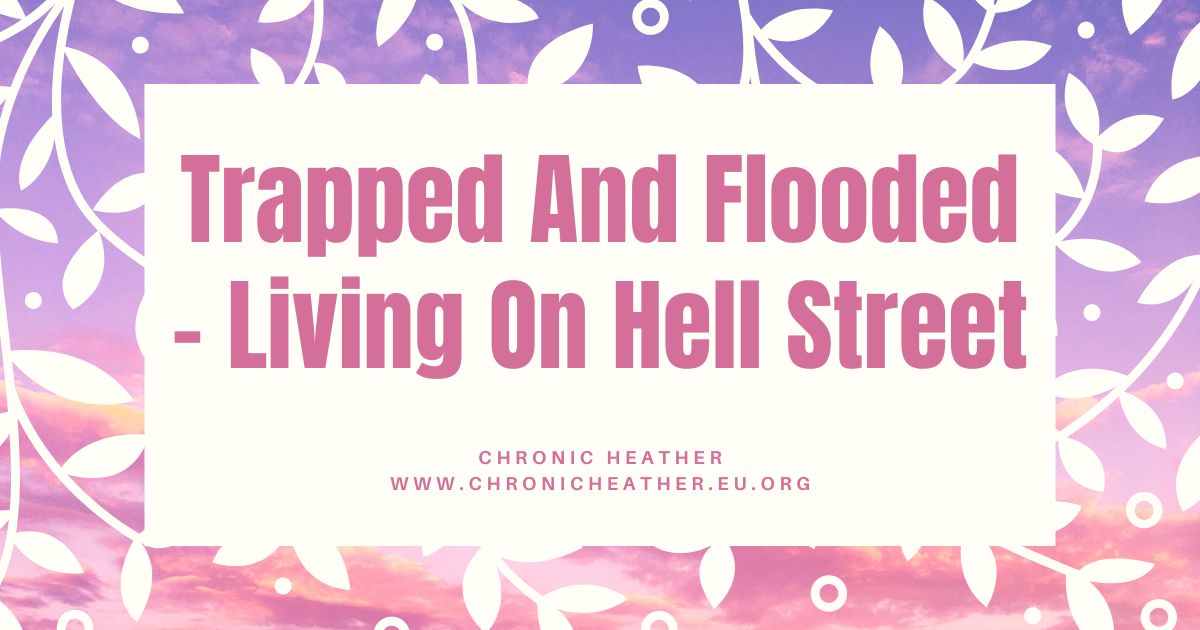 Multiple BIG issues living where I live that leave me living in a street that gets flooded every time it rains and even has sewerage in the garden, right up to the front door when it rains heavy! Every time! Plus trapped with a road that is so damaged I couldn’t get out with a wheelchair.

I live on an unadopted road. Most people haven’t got a clue what that means. It means that the council don’t own and won’t maintain the road nor the drains or anything on it.

The road is in such a bad state that there are about 100 potholes varying from a tennis ball deep and in size to 6 foot wide large holes.
Cars have to drive slow so they don’t damage their car.

The road got worse and worse after people seem to have a car each and there are large vans coming and going constantly from the people that are contractors, so there are large vans coming and going all day long too.
The road is so bad that even if I manage to get a power chair one day which is my dream so I can go out and not be housebound, that I wouldn’t be able to drive it on the road easily!

On the pavement along the main road at the top is completely blocked with cars parked half on and half off the pavement. Some are parked fully on the pavement!
People on foot struggle to walk on the path so would be impossible in a power chair, but I guess I would just need to get to the bus stop if I had a power chair. I still want one as it is my only hope of being able to go out independently.

The council won’t do anything about the road.

I am trapped in the house by my health, money and a road.
I know for a fact that the CAN fix these roads if they really wanted to help as if roads are dangerous they have a duty to help, BUT getting them to is impossible as I have tried many times over the years.

Plus as you may or may not know, the roads floods every time it drizzles let alone rains!
There is one big drain to take road surface water that is so old and collapsing that it doesn’t work. It runs under houses away from the road and it is the responsibility of the houses on top of it, but this is England and unless you get lawyers involved, no one will fix it.
The council and water company won’t. I have spent many years trying to get it fixed.
So much so that I am the only person that knows where all the pipes run as they don’t even have them all mapped out so I am the one they have to ask. How bad is that!

There are 2 small drains at the top of the road that don’t take water and when it rains they actually overflow with lots of water from somewhere else. No one will investigate from where the water comes as it is an unadopted road…. So to find out would cost money.

There is nowhere for all this surface water to go so it floods the street and a few houses. We get it worse and the toilet blocks up every time making the toilet and all drains unusable.
A few of the houses including ours have combined sewers for surface and sewer water. There is one manhole that leads to this. The neighbours don’t want to be flooded to they take the cover off which means the water backs up and we get it the worst as we can’t use our toilets or drains. The people that take the cover off get it the least!
I am disabled so I can’t just put the cover on as I can’t go out.

To make it worse, the water mixes with the combined sewers and there is sewage in the water in the garden. Yes human waste! This affects us mainly and the neighbour gets it a bit.

So the road gets more damaged with the floods and it is never ending.

So if I manage to one day get the item I NEED for freedom, a power chair, I would struggle in the road due to these issues!

I always wish that like in some movies, that someone would want this land for something and would offer the owner a buy out so we could go somewhere else. That is my dream.

Not just these issues but the radiator doesn’t work in the living room, well heating has been totally broken too so need a new boiler as well as all the piping re-done, the gutter is broken and the water pours down the walls into the window inside and leaves mould and damp at the back too as well as at the front as there is mould and damp at the front due to the flooding from every time it rains plus much more.

So much needs fixing.
I often wonder if the damp and mould have made my health worse but on £300 a month income, even if I wanted to move away I couldn’t as I can’t afford rent anywhere!! Remember that £300 is my TOTAL and only income as I can’t get ESA or UC.

What on earth did I do wrong to deserve a life like this?

I wish I met a millionaire that wanted to help or something as there is no way any of this could get sorted without tens of thousands of pounds!

So instead I remain trapped here as the only other place I could be is on the streets homeless on my lack of income.