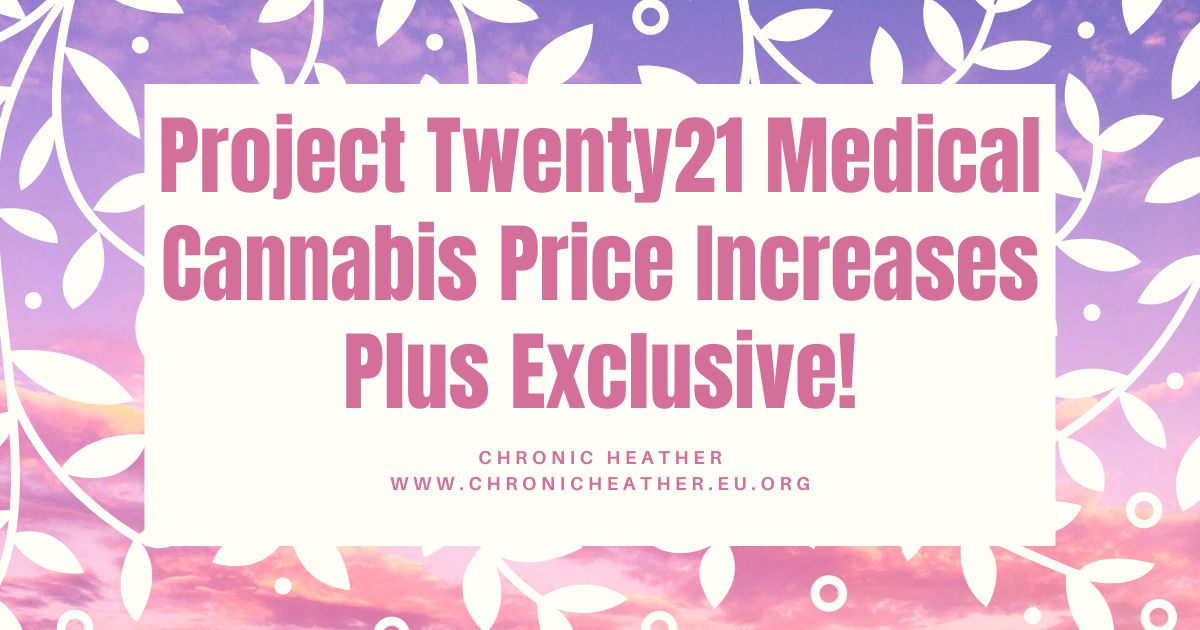 From 1st February 2021, cannabis prices on Project Twenty21 (PT21) are going up from £5 min a gram to £7 min a gram. They made a news post about it on their site.
This makes prices for flower now the same as non PT21 for many products which defeats the whole point of PT21!

Also as an exclusive, we can reveal that they also already axed 1000 free places on Project Twenty21 before they even began! That means this isn’t the first price increase really as for many people like myself, we were waiting for the free 1000 places. It was on the site, but something not a lot of people saw. As I was one of the first 50 to even join the PT21 waiting list many years ago, I have lots of screenshots about these 1000 axed places! Read on for more information on this and the new £2 a gram price rise.

Project Twenty21 is similar to a clinical trial type system where patients use cannabis for health issues and fill in surveys to report their improvement while using cannabis, except they pay for it at a reduced cost, unlike in a clinical trial which is free.
The whole idea is that it is a clinical trial type system that hopes to eventually give their findings to the NHS in the hopes of getting cannabis on the NHS for all patients.
You get a discount on your medication and you fill in surveys and complete more information you would it you weren’t PT21, but now there is no discount on your medication for lots of products (for flower at least).

They are changing how they do the pricing too. You will simply pay per gram whereas it used to be 10g intervals up to 30g that worked out at £5 a gram for 30g and was a bit more expensive for less product.
Now it is just £7 per gram for flower or oil no matter how much.
That is how it should have always been! You should pay one price per gram. Not per 10g like it is currently.
BUT the price is much too high now for PT21 at least, as the whole point of PT21 was savings on your medication in return for your feedback and surveys.

The bad thing is the price increase! £5 to £7 a gram makes a £150 a month for 1g a day now £210 a month! That is a huge increase!
Also, before PT21 even started, they increased the cost for 1000 low income people/ people on benefits. Proof of this at the bottom. So this is not the first price increase really!

And remember it isn’t just that price a month either! There are doctors fees, prescription fees (yes for the just to write a prescription you get a fee) all on top of the cannabis cost.

The quality of the cannabis as always been pretty poor with lots of complaints of mould, lots of shake and other complaints. The new price does not match the quality of the product at all! There is absolutely no excuse for the price increase. The quality is the same. There are the same choices.
For most products now, they won’t be cheaper on PT21 which makes zero sense at all!

Remember non PT21 cannabis isn’t going up, just PT21! So there are are now products cheaper non-PT21 from Feb which baffles the mind. The quality is the same pretty poor quality and the prices are going up, JUST for PT21 patients which seems massively unfair!

I would have been devastated to have come off all my opioids and then have to go back as no access to cannabis. I came off the morphine but I can get that back. I didn’t stop the fentanyl as I didn’t have enough money for oil which I would have needed to be able to come off the fentanyl. Oil and flower.
I didn’t try to come off my opioids when I started cannabis as I knew I couldn’t afford it long, although I never expected the price to go up like this! Not this huge amount!
Someone on Reddit got a reply from Drug Science that states that it was on the website that the price would end in December 2021, but it 100% never said that where I looked, and I looked on every page when researching it.

I would have understood if it was the normal pricing was going up, but it is just the PT21 products that are going up! This is really bad now as it makes no saving on flower! Flower is now more no cheaper than non PT21! It totally defeats the point now. There is no way they can say that this price increase is justified with the quality of cannabis.
Remember you have other fees on top too. Doctors fees, prescription fees etc.
They are making those of us who need more than others, pay a LOT more with the new pricing and it isn’t justified.

Remember, the prices are supposed to be low as we are trailing them! This is a sort of clinical trial as they are using our feedback and surveys to gather information in the hopes of getting it on the NHS.
We still pay for the product, the doctors fees, the prescription fees etc. Now for many, there is no saving at all with PT21 from February!
Nowhere near as many will join with tine new fees so less research! In fact lots ARE already saying they will leave and are leaving due to it. Just check Twitter, Reddit and Facebook groups.

Someone started a petition asking them to stop the price increase which you can find here. I signed and shared it and it would be great if you can do the same, it just takes literally 30 seconds max!
I also sent Drug Science an email with my thoughts. You can find their contact info here and maybe if a lot of people give their thoughts, they might listen. They might not, but worth a shot and they wanted our thoughts on the product from the surveys they sent us, so I think it is only fair we tell them how unhappy we are about the price increase.

People have spent months/years getting a cannabis product that works for them. There isn’t much choice of cannabis on prescription in England as it is so we only have a small choice, and now they want to make it so that PT21 patients can’t have a non-PT21 product while on PT21? It shouldn’t matter! Cannabis is cannabis!
They are all different products as it is so why should we be forced off something that works when we find something that works for us?

Also you most likely won’t be able to get non PT21 products if you are a PT21 patient. Right now you can get whatever you want, but at least some clinics will not allow this in future. And this is why;

A while back, as my crowdfund money was running out for the cannabis, I was told by my a pretty new staff member at my clinic that if I was still getting my prescription in December that I wouldn’t be able to get my usual product after December and would be moved onto something else.
I asked why and said I wasn’t happy, and she didn’t know but she said my product isn’t on PT21 so I couldn’t have it this year if I am a PT21 patient.
It also seemed like she shouldn’t have told me as she seemed muddled after I questioned her about it and she changed the subject multiple times to avoid it and eventually said she would look into it but no one ever got back to me about it.
Now I think it might be because of this price increase and maybe she knew it was coming already and said that because of it. She clearly told me that I couldn’t have it this year as it was a non PT21 product and then acted like she never should have said it. As I said, she was pretty new.
They don’t seem to want me/us to have the cheaper non-PT21 product whilst on PT21. That is what she told me and now with the new pricing, I am sure that is why.

This makes me think. How long have they known this price increase was coming?

I wondered why they said I wouldn’t be able to carry on getting it but now I hear about the price increase I see why! I am sure they knew the price increase was coming when they said that to me. Having cheaper products non-PT21 makes the whole point of PT21 pointless as no one will join PT21 if they can get cheaper prices without signing up to PT21 which is how it will be from Feb.
Why would you pay more when you have to do more too?
This will affect the research as the point was to gather research to pass onto the NHS in the hopes of getting cannabis on the NHS in future, but with high prices, why would anyone join?
I am sure more will get told the same now that the pricing is out in public. If you were using a non PT21 product, you might not be able to keep using it if you are on PT21.

Also on a side note, one thing that all clinics do wrong, is still treat it like a drug and not a medicine!
Even now many doctors of the clinics that prescribe cannabis still say things that aren’t true about cannabis or do your prescription late as they don’t treat it like a medicine!
They would never give you your regular medication late, but with cannabis it is often late as they just don’t take it as serious as they should be!
If you have ever had an appointment with a doctor that can prescribe cannabis, a lot of them talk about it as a dangerous drug and say lies that aren’t true. You might get lucky and get a good one, but me and many others I have read about, have had doctors that treat it like it is dangerous when in reality, it is safe.
I have had them say utter lies about cannabis in all appointments I had. Every single one and this is in a clinic that prescribes cannabis!
I won’t name names of course, but one I blogged about here was like this back when I had some crowdfund money for medication
No doctors in these clinics should be saying lies that aren’t true about cannabis but they do and I am sure it will be like this for many years in the UK.

I am speaking about flower as I haven’t personally used oil in the UK so I can’t give my opinions on the cost as I haven’t used it. Flower is also what most people use (source: Drug science)

Other Price Increase Too!

Also, do you know they were supposed to have 1000 free places originally? They scrapped it and removed any sign of it on the website, but I kept all the information I got via email.
They have just over 2000 patients now and 1000 people on low income/benefits were supposed to be free. This was quietly scrapped without a notice anywhere.
In fact all traces of it vanished, other than all the emails and screenshots I kept!