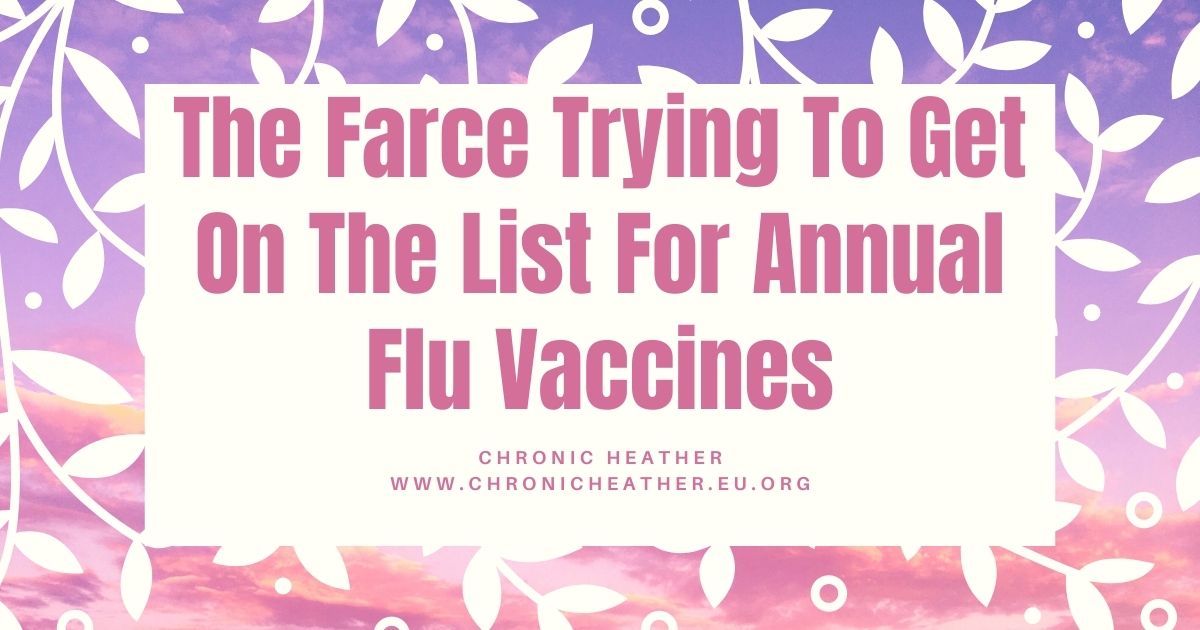 As you know, I have tried getting a flu vaccine from my GP for many years. I thought I was now on the list with my latest attempt, but apparently not!
Here is information about why you are eligible for a flu vaccine free in England if you have CFS/ME and also my experience a bit lower down.

If you have CFS, you are eligible for the same reason. There is a document on the ME Association website that explains it is a why and gives links to documents so you can speak to your GP too.

I spent many years trying to get it and being told no.
I tried asking the NHS to update their site up add Chronic Fatigue as a eligible condition so that the GP would stop this denying me and everyone else with CFS something I am eligible for, but they were about as helpful as a doorknob as they wouldn’t read the links and information I gave them from many CFS/ME charities that says we are eligible, but they just dismissed it and said lies to get rid of me.

I went from speaking to the NHS to speaking to UK Health Security Agency who first said no you can’t get them and sent a link to the NHS handbook that says neurological conditions are eligible for a vaccine. I replied and said “you said no but sent a link to the exact handbook that states that we are eligible, just read this section” and I gave them the section. They then didn’t know what to say so said “speak to the NHS” who I said I have already spoken to.
I went back to the NHS and they didn’t bother to reply to any email!
I also spoke to numerous departments of the NHS and health departments of the government about it and all just either fail to reply or give a reply that isn’t true. When you show them it isn’t true, they stop replying.

I have the emails with all the lies in saved from every department I emailed, as they are that bad and some are shockingly bad.

It is like they don’t want people to get the flu vaccine. Strange that they wouldn’t want to make the information clearer and easier for all!

The information is all there on their handbooks and websites, but they need it pointing out as they don’t seem to realise CFS is a neurological condition, there are links to the handbooks with sections highlighted, but they just don’t read them. If you point them out, some GP’s will instantly add you to the list, others like mine, just don’t read it and ignore anything you say.
You can go to pharmacies too, although I can’t due to being housebound.

Anyway, I sent a letter template from the ME Association and the doctor ignored it initially and said no I cannot get it! The note on my medical record says no I can’t get it and he will speak to me at my next 3 weekly appointment.
He spoke to me and I said that I am eligible and he just said “ok I will give you it”. That was it. He didn’t read the long letter at all…
This is after years of trying.
Getting a flu vaccine also puts you in a group that at the height of the pandemic, this was used in an way to decide who gets the Covid vaccines first. As well as other things that often say “you are eligible if you usually get invited for a flu vaccine”.

I went in for the vaccine, waited 40 minutes in a crowded GP surgery and then the nurse said “oh you aren’t eligible”. I said (in a slightly higher pitched voice) “What? My GP authorised this and the nurse called me to book it”. She scrolled 2 lines and said “oh yes here we are”…. (imagine me face palming)

After the vaccine she said, you don’t have a flu shield so you won’t get called next year!

I sent a message to the GP clinic but I am back where I started! The whole point was to get onto that list! Who would send a 3-4 page detailed letter, make phone calls and speak about it for years, just to get a single flu jab?!?
This has been going on years.

And here I am having had my first flu vaccine, but still not on the list for flu vaccines!!

As for side effects, I didn’t have any other than mild arm pain (although I am on opioids so might have been dampened) and feeling a tiny, tiny bit weird afterwards.
My chronic pain in my neck is much worse the day after it, and the chronic pain in my back is a bit worse, but not as much as my neck and that is about it.

I just wish that I had been added to the list after giving them lots of proof that I am eligible, I just wish they actually would read it which clearly no one has.

I will update this post once I get any news unless it is worthy of a post in itself.