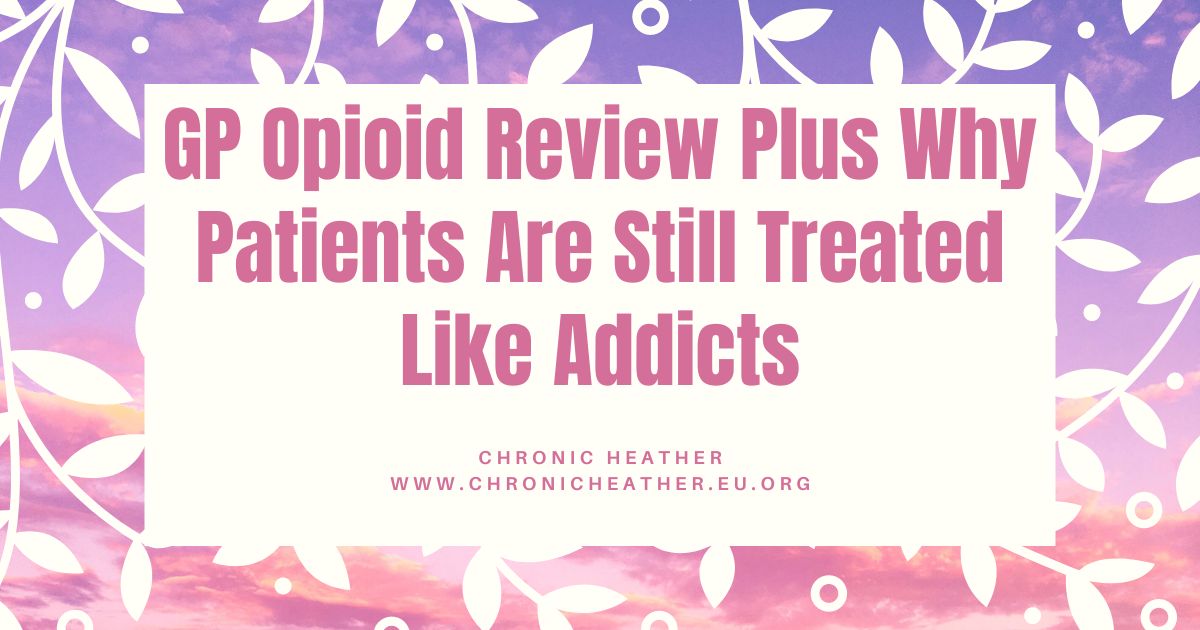 I had the most terrifying call out of the blue today.
A lady called from my GP clinic saying she was doing a opioid review.

If you are a opioid patient, I am sure you will know how much they try to get us off opioids for no reason at all other than they hear about opioid deaths and overdoses and relate that to pain patients.

She didn’t say who she was and even though I have a telephone appointment now on Friday, she still wanted to ask me questions to see if she could reduce or get me off them!
I instantly started getting that cold shiver down my back and tears in my eyes. I have been here before.

The crazy part is, I don’t know her. No idea if she is a receptionist or a doctor but I have ever spoken to her in my life! How could she decide if I can come off or not? She has no idea about my pain!

Anyway, I told her the same as I tell everyone. I was bedbound before Fentanyl. I would scream night and day to the point the neighbours would knock to see if I am being hurt. Or even call the cops to see what is happening.
Then they find me in bed screaming in pain at 4am. Unable to sleep for more than 5 mins a time due to pain.

She listened and said that obviously she can’t take me off them. PHEW! But this shouldn’t be happening!

We shouldn’t be getting random calls for no reason trying to get us off opioids when we haven’t had any major issues!

I am seen every 3 weeks and she knew that and that I have another appointment on Monday, yet still wants to do a review?
I guess at least now she knows how bad it is. Still no idea who she was either!

That is why I tried everything available before using Fentanyl. This is a last option thing and the only thing on the NHS that helps a bit.
Cannabis helps massively but that isn’t on the NHS and costs £150 a month plus £45 prescription fees and £70 every 3 month doctor fees so I can’t afford that ever on my £300 a month income so that is why I am stuck on Fentanyl which I have severe withdrawals from every 48 hours and other issues such as much worse fatigue (plus chronic fatigue.)
I wouldn’t be using opioids if I didn’t have to! There is no other choice in the NHS as they won’t prescribe cannabis for pain on the NHS so patients have to pay hundreds instead, which of course I can’t do living on £300 a month!

Opioid abuse is nothing to do with opioid users!

Opioid abusers use illicit opioids or make up conditions they don’t have for it. But pain patients who had have pain for a long time, do NOT abuse opioids! It is the people who abuse the illicit ones. i.e the ones on the street that are illegal.

So because people without pain abuse opioids, the pain patients suffer the consequences!
We get taken off medication for no reason other than they want to because of the things they hear about people that abuse illicit opioids.
They don’t seem to ever read the information to see that it isn’t pain patients that abuse it! We use them to keep the pain down so we can survive!

In the US alone, the CDC states that 85% of overdose deaths involved illicitly manufactured, yet patients are the ones that get targeted!! Always patients.

The UK don’t post their latest stats publicly from what I have found, so harder to find the info without doing a freedom of information but I don’t have the health for that.
The UK seems to be worse than the US for not differentiating between illicit and prescribed in relation to abuse and deaths in their publications, although both are bad for doing this.

Chronic pain patients are opioid abusers nor addicts! We are people taking our medication as prescribed so stop treating us like addicts in 2022! This isn’t ok!