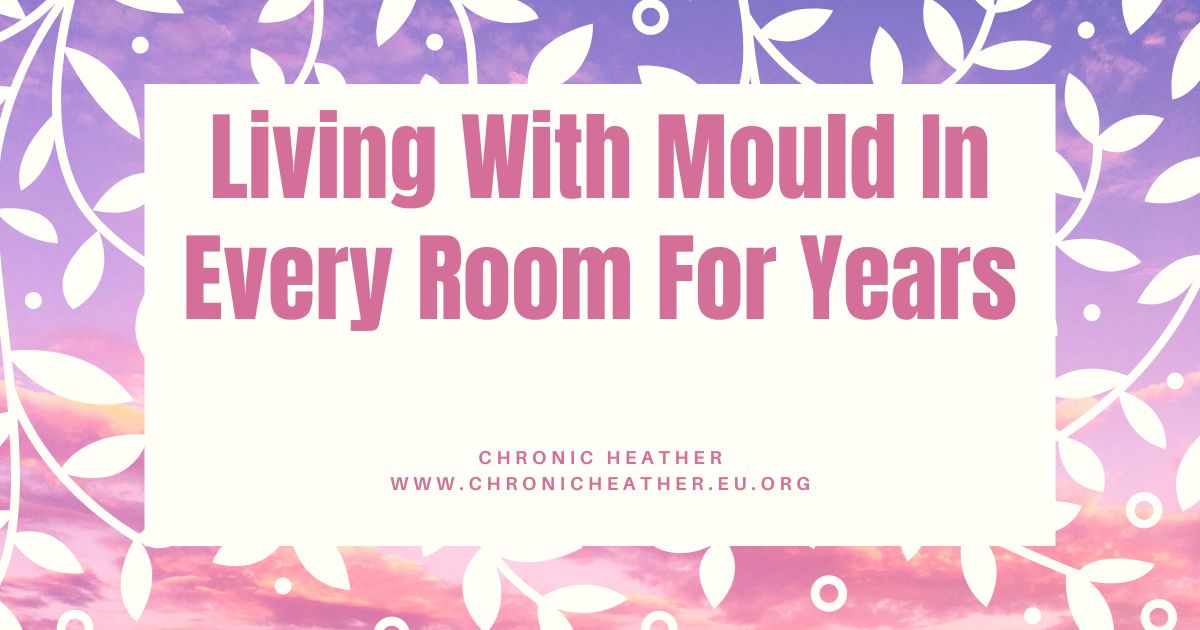 One thing that worries me that it might be contributing to health conditions, is mould.

As you may know, I live in a stone house that is freezing cold all year round, even in “heatwaves” it is cold and in winter it is freezing cold. 2 foot thick stone walls leave the house 3c-7c year round. Even in the “heatwave” it was around 12c inside!

I haven’t been able to afford the heating on and won’t be able to afford it on for the foreseeable future due to energy costs. If they stay like this, I won’t have heating ever again.

You might think it will be just one or two things here that make the damp and mould, but nope! It is lots of things that cost tens of thousands to fix in total!

Causes of damp and mould here:

The cost of all of this fixing is many thousand to tens of thousands of pounds in total to sort it all.

So impossible to get fixed as I can’t work as you know, and as hard as I try to raise money from my blog or trying to stream but I get nothing so I can’t pay a penny towards it as I can’t afford to survive myself on my poverty income of a few hundred pounds a month.

I know how dangerous it is. I know! It could kill us.
But the choice for me is here or streets and I can’t be homeless with my chronic illnesses plus morphine and fentanyl. Imagine now many people would rob me for my painkillers if I was homeless too! Not that I could cope there as my health is just too bad
Plus I am freezing cold below 24c so that gives you an idea how bad it is for me at home in 3c-7c temps with no heating, let alone if I was homeless, I couldn’t cope!

I can’t afford rent anywhere so I share this house so I don’t have a landlord (check my about me or FAQ for more) so it is either pay towards all these issues fixing or just live with it. Those are the only choices.

I can’t afford even heating let alone anything else, there is no way I can pay towards it all fixing so it is live with it or leave and leave is out of the question as I mentioned.

This is just another thing that needs sorting. It is so bad though that even if I won the lottery (can’t afford to play) we would have to evacuate for weeks while they fixed it.
Can’t afford it fixing anyway as I can’t even afford heat so this is one of the things I worry could kill me.
I don’t want to die yet, especially not from mould!

If you remember on Twitter when I posted about the broken gutter, I even tried to raise some money to get it replaced but I got £0 so just left it to get worse as there is no other option. I knew I wouldn’t get anything though and I felt bad even asking, but sometimes you have no choice when you have no relatives and no money.

I never expect people to help anyway as you may know as I post my donation links now and again and always say no one has to help. Sadly though, as I say that so much, I rarely do get help.
I know some disabled friends from Twitter try to help and I tell them to save their money as it is hard time for all right now, especially the chronically ill and disabled!

I have genuinely had dreams where a rich person or philanthropist, finds me and helps me out such as buying me a house or sending me £50,000/£100,000 or something like that (I know this is just a dream), and I live a happy life. I have that dream a lot as I dream about it while awake too. Dreaming I could be happy in a house or flat with no mould or flooding. How amazing that would be.

But there is a 0.00001% chance of a philanthropist helping which would be the only way we could get these issues fixed, or get out of this house, which honestly is more preferable as this flood street is not somewhere I want to live as I am genuinely terrified every time it rains which in England, where I live especially, is every few days at least if not every day.
I worry I will be homeless from it and it is just a nightmare to clean up, especially when you can’t do it due to chronic illness and disability!

So I just live scared to death every single day.