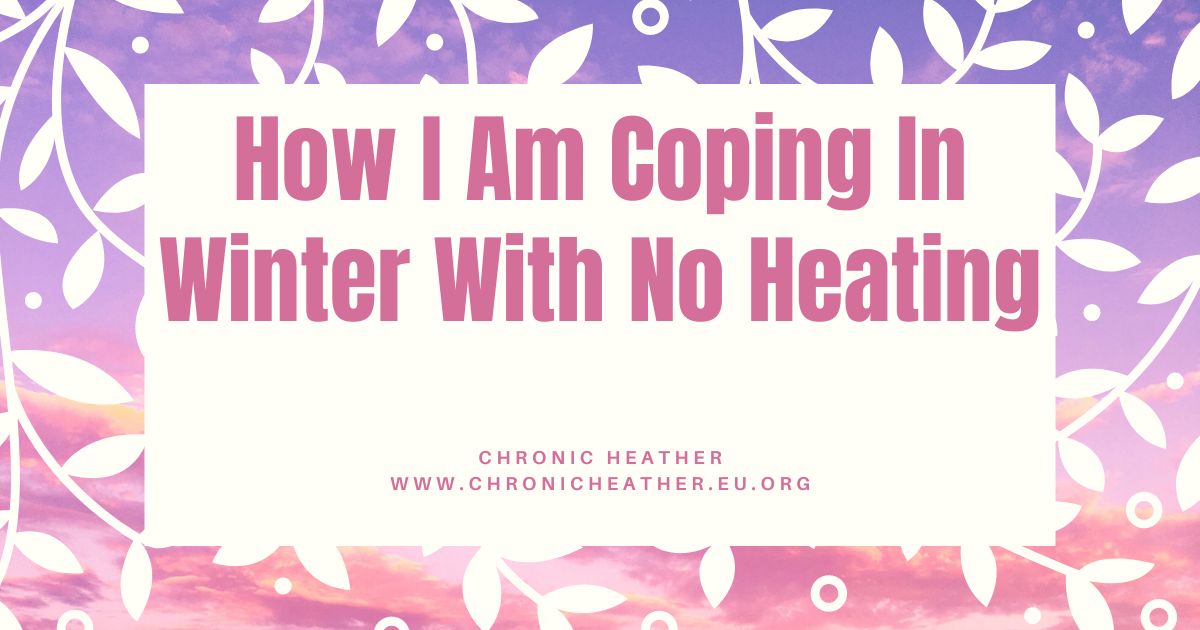 The cost of living crisis and energy crisis has really had a impact on heating for me as it is just too expensive to have the heating on even though it is freezing cold with outdoor temps currently a high of -1c and a low of -5c!

This house is especially cold as I live in a very cold, 1800’s 2 foot thick stone wall house, with major damp and mould from the low indoor temps which are 3c-7c indoors in winter.

Stone is really bad for insulation, plus the damp which comes from the broken gutter costing over £700 to be replaced due to the fact it is a listed building, faulty soakaway which leaves water soaking into the wall, flooding to the door from whenever it rains heavy or for a long time, and a broken damp proof course from a company no longer in business.
I have another post about the damp here so I won’t go into too much detail as I have covered it before.
I know mould is dangerous, but nothing I can do about it.

All of this means indoor temperatures are freezing. 3c-7c indoors for winter is very common.
If I run a dehumidifier, it would make it warmer (although not warm) as it removes the moisture.
I have 2 heaters, one next to my bed and one in the living room, but I can’t boost them for more than 10 mins at a time due to the cost.

Even though I am home 24 hours a day throughout winter, I can’t have the heating on long and often boost for as little as 15 minutes due to the cost of energy, as we are already over £700 in debt for energy cost from the previous huge increases to energy bills.

I had held out having any heat at all until December started, even though it has been freezing inside, but now I need heat as it is just too cold.
I haven’t had central heating on all day since about February 2022!

I am currency forced to have central heating on at least once a day so only just started putting it on for a morning, and then I just boost a heater in the day time for around 15-30 mins twice a day. Can’t afford more, but had to increase use as it is so cold! I just wish I could leave it on all day or at least 6 hours.

It is warmer (warmer not warm) if I run a dehumidifier, but I can’t afford to run one, plus mine is about 20 years old and barely does a thing anymore, plus it costs 4x the energy of newer ones. You can still see water on the windows and damp even when it has been on all night. Need a new cheaper to run one really, but of course, that is out of the question as they cost well over £100.

Everything has gone up in price, especially food and more so, heating.
Heating goes up every 3 months now and when it does it isn’t 5%, it is 25%, 30% etc. Large amounts, not pennies! This is even though they initially capped heating for multiple years, the new chancellor went back on that when he was voted in by MP’s (not the public as ever.)
Even though prices are supposed to be capped until April 2023, they actually go up another 21% in January 2023 too! This is a sneaky one that not many even know of. Really bad when we are supposed to be literally capped until April 2023 yet they sneak this increase in January too!

It is warmer (warmer not warm) if I run a dehumidifier, but I can’t afford to run one, plus mine is about 20 years old and barely does a thing anymore, plus it costs 4x the energy of newer ones. You can still see water on the windows and damp even when it has been on all night. Need a new cheaper to run one really, but of course, that is out of the question as they cost well over £100

Here are the temperatures for the next few days taken from DarkSky, although all sites say pretty much the same.. See how bad it is here? A high of -1c most days and a low of -5c. Every day is in negative temperatures.

One thing I have found, that is if I post about not being able to afford heating on as I have no money, and that I have damp and mould too, I pretty much always get messages saying things such as:

I definitely do need a dehumidifier, but needs are something I have lots of but can’t do anything about it as they all cost money.

I just want to be warm with limited damp and mould. Is that too much to ask?

If you would like to help at all, you can by checking out my support me page. Lots of ways you can help, both FREE and paid. I also have a wish list with items such as thermal items on there. I have various items for health, heating and others. Nothing ever expected! Look after yourself first!