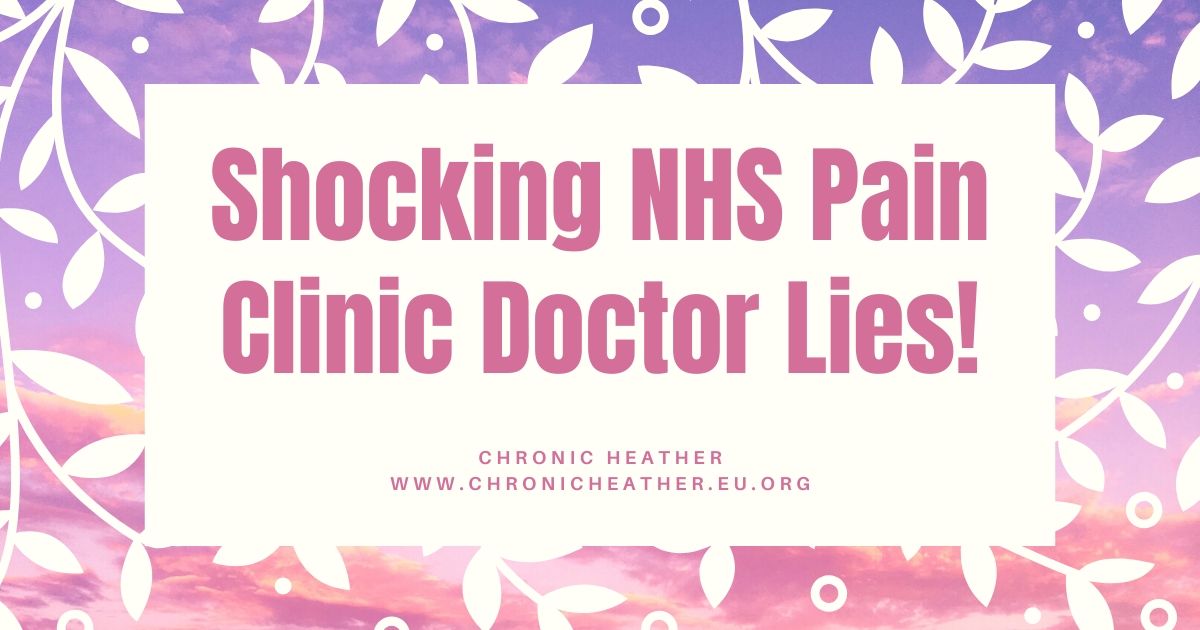 I went to the pain clinic the other week after years of waiting due to a previous person failing to do the referral.
As I get chills between patches he gave me Clonidine for the “mild withdrawal” which he gave me at the start of the conversation.

He said there isn’t much else to try as I had tried everything, but told me I could try Lidocaine infusions through an IV which isn’t guaranteed to work but if it worked, in 6-8 months I could reduce my matrifen as he didn’t seem to like me on it even though it has only been a few months, yet I know how some doctors hate opiates even though they work for many and the NHS is trying to stop opioid usage like what is happening in the USA.
He told me “I wouldn’t expect you to just come off them as it is not that easy”, and I only would if the Lidocaine infusions helped many months down the line. I clarified this with him 8 times with 4 staff in the room.
I pass out with needles but said I would try the IV as if it worked then that’s long term pain relief.

Fast forward to a few days ago. I have access to my patient records so I read the letter he sent to my doctor (I am supposed to get copies but never seem to). Basically it was filled with lies.

Shocking mistakes to make, it was like he looked at someone else’s record it was that wrong, plus lies as what he said to me was completely different!

I spoke to his secretary and after chasing it up a few times as they didn’t call me back, he stands by the letter and claims the things wrong with me are on my patient record (which even I can see they aren’t) and that he wanted me to reduce the patches now and that is why he gave me the Clonidine even though he gave me that at the beginning of the meeting purely for the withdrawal between patches and he confirmed numerous times that I was only going to reduce the patches if the infusions worked after months.
How can he claim he told me to reduce my patches now which he didn’t, plus if he was going to take me off them he would have prescribed a lower dose to taper off as you can’t just stop them, he literally said in the meeting that I would only be reducing if the IV was still working after 6-8 months!

He also says now I have broken patient doctor trust as I queried where he got those side effects and medical conditions from so he cancelled my infusion appointments!
Said I would have to go to another hospital via my GP if I wanted to see another doctor. I waited years for that appointment and now all this! GP’s only refer to specific regional areas so that would now be impossible as that is the only hospital in the GP practices area.

So basically as I didn’t just agree with the lies in the letter I can’t be treated there.
Just asking where he claims he can see the side effects in the patient history when they aren’t there, why he claims I have conditions I don’t and why he changed completely what he told me about reducing the patches meant that he shut down and said he stands by his letter and I can’t have my treatment there as there is no trust anymore!
It seems like catching him out in a lie and a massive mistake means that he cut me off rather than having to deal with the errors and lies himself.

I spoke to my GP and he agreed that it didn’t make sense and couldn’t understand where he got the apparent side effects and medical conditions from as I don’t have them. Also advised me to complain about the doctor.
Full details about this follow up about this here.