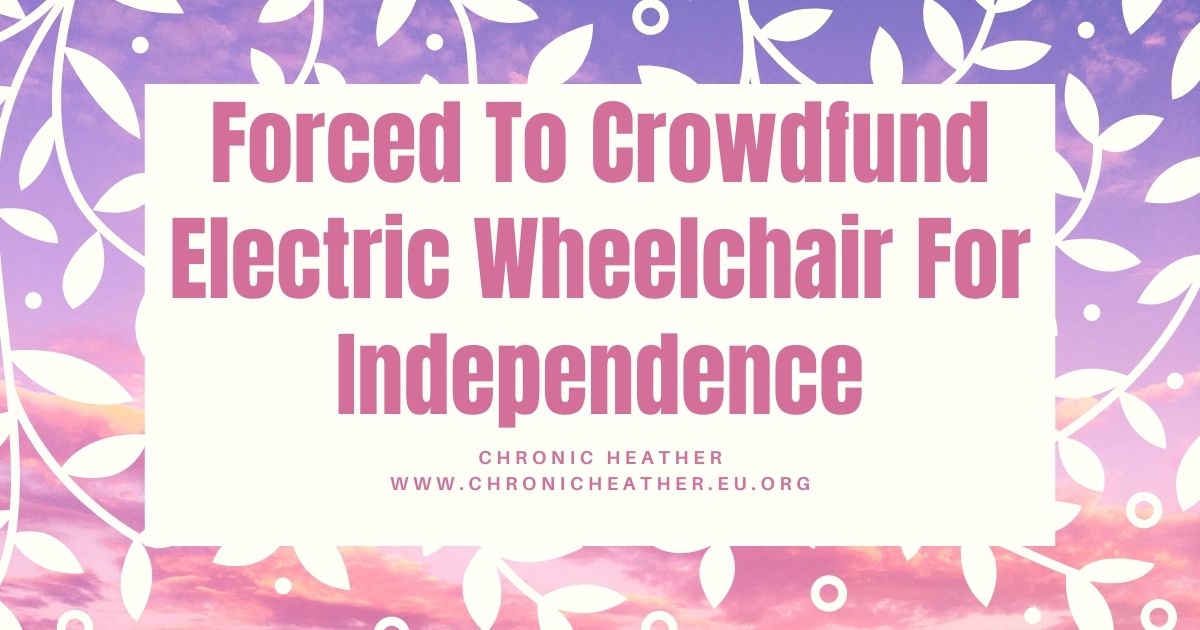 As you know, I am housebound and barely ever see outside these four walls, other than for medical appointments. I hate it and being stuck inside is a horrible feeling.
I have no freedom. No independence.

I had to start a crowdfund for an electric wheelchair (also called a powerchair) as I really need to be able to get out now and again, even if to the park or to town! Just need to get out of the house occasionally which is something I never get to do as I am housebound, and only leave the house for medical appointments which I can’t do over the phone.

I am unable to push myself along so I would need an electric wheelchair to be able to go out of the house and have some freedom, which costs a lot of money. One that folds down is around £2k-£2.5k! I get just over £3k a YEAR total income (just over £300 a month) so that puts it into perspective how unobtainable it is for me.

Some people say you can get wheelchairs on the NHS and yes that is true, but there are rules in different areas all over the country which is known as the NHS postcode lottery, as where you live means what is available to you varies by area.
In my area I can’t get a wheelchair for outside use only on the NHS. This is the same in many other areas too. You have to be able to use the wheelchair indoors too, which is completely impossible in this tiny place. It would need to fold just to be able to get it inside!

Then people often suggest to get one on PIP. I don’t get high rate mobility (even though I should) and even if I did, I wouldn’t spend it on an electric wheelchair as PIP is my ONLY INCOME! That little over £300 a month income is all I get and it is gone as soon as I get it as just over £300 a month isn’t anywhere near enough to live off so I definitely couldn’t use the PIP money for one even if I got the high rate.

I feel that anyone housebound should be able to get a wheelchair or electric wheelchair for free if they can’t afford it. Why should we be abandoned and left housebound without any enjoyment in life?

I feel completely abandoned by everyone. From the DWP with my lack of income from benefits I can’t get, the NHS with lack of tests and diagnosing I haven’t ever had done, and the my lack of a electric wheelchair that I can’t get simply because I can’t use it inside as the house is too small!

My only choice is crowdfunding.
I hate that I am being forced to crowdfund something that is treated like a luxury but is a necessity for many of us disabled, housebound people!

I find crowdfunding so utterly embarrassing. Posting the link and asking for donations is excruciating, especially when you aren’t raising anything and keep posting it. So embarrassing!
I just feel like I am begging, which I guess I am, but I don’t expect anything from anyone!
It would just be so great if a philanthropist millionaire just wanted to help and got me one but that is just a dream!

A wheelchair is not a luxury, it is a necessity! And a I can’t use a manual wheelchair, it has to be electric but it still is a necessity and everyone that is housebound should be able to get one!

I am someone who has lived alone since I was 15. I have been so independent all my life.
I have never ever asked anyone for any money or anything. The only time I have asked is over the last couple of years or so when my health got so bad that I had to ask for help from kind strangers

Especially as I have already tried to crowdfund my painkillers for my chronic pain which I raised some of the money but then it stalled and stopped raising anything so I ran out of the only painkiller to really help me, which was also unavailable on the NHS. I would have to re-post the link which I tried to do not too often but I might get a retweet or two but that was about it.
Some people said that a powerchair is more likely to be funded than painkillers for chronic pain and seeing as my crowdfund for painkillers died off many months ago now, I should try to fund the thing that I have wanted for many years to give me freedom!

I doubt I would raise the money for it, but I have to try. £2k is a lot of money and I don’t have relatives that could help and I don’t think anyone I know would help but I am going to have to try.
You never know and an electric wheelchair is independence and freedom that would be lifechanging.

You can find my crowdfund on the JustGiving site.

It will be open for a long time as I really need one and I don’t care if it is next month or next year, I just need one as being housebound strips all my independence and I really would love to go out, even if just to the park!
I have also enabled monthly donations so you can donate a small amount every month too or just once, whichever you prefer.

Thank you in advance if you help. I always thank everyone that donates on JustGiving too.
It really would change my life completely. I could do and see so much.

4 thoughts on “Forced To Crowdfund Electric Wheelchair For Independence”